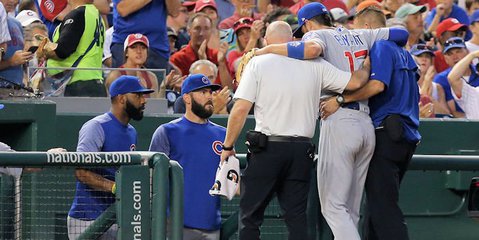 Chicago Cubs third baseman Kris Bryant suffered a right ankle injury after stepping on the third base bag awkwardly in the fifth inning against the Washington Nationals on Wednesday night.

Bryant had to be helped off the field by manager Joe Maddon with a trainer and Bryant could not put any weight on his right ankle as they ushered him into the locker room.

The ankle appears to be feeling better after a few hours of treatment.

Bryant told reporters on Thursday afternoon that it is a mild ankle sprain (swollen) and it feels "a ton" better after the game was over. He doesn't anticipate landing on the disabled list with the ankle injury but won't be in the starting lineup for today's game.

Maddon told reporters that Bryant's injury will take some time to get better.

"I saw him walk on the bus and I thought it was encouraging to see that," Maddon said. "We just have to give this a couple days."

Check out the video of Bryant getting injured below.