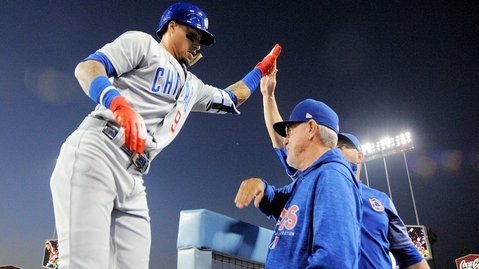 As part of the agreement, the parties will meet and discuss a renegotiation and extension of the Basic Agreement, and the Office of the Commissioner has agreed to not implement a pitch timer for the remainder of the current Basic Agreement.

The changes effective for the 2019 season include the following:

• Mound Visits: The maximum number of mound visits per team will be reduced from six to five.

• Trade Deadline: The trade deadline will remain July 31st; however, trade waivers will be eliminated. Players may be placed and claimed on outright waivers after July 31, but players may not be traded after that date.

• Joint Committee: MLB and the MLBPA will form a joint committee to study other potential changes.

-- All-Star Game fan voting will be conducted in two rounds. During the “Primary Round,” each Club will nominate one player per eligible position (three outfielders), who will be voted on by fans. In late June or early July, an “Election Day” will be held in which the top three vote-getters at each position in each League during the Primary Round (including the top nine outfielders) will be voted on by fans during a prescribed time period to determine the All-Star Game starters. Further details on the new fan voting format will be announced in April.

-- All-Star bonus payments will be given to the top three vote-getters at each position in each League during the Primary Round (top six for outfielders). Additionally, the prize money awarded to players on the winning All-Star team will be increased beginning with the 2019 All-Star Game.

-- Both Clubs will start the 10th inning of the All-Star Game, and each subsequent inning, with a runner on second base (re-entry substitutions allowed for runners).

The changes effective for the 2020 season include the following:

-- The active roster limit from Opening Day through August 31st and in Postseason games will increase from 25 to 26, and the minimum number of active players will increase from 24 to 25. The current Major League Rules allowing for a 26th player for doubleheaders will be amended to allow for a 27th player.

-- Elimination of 40-man active roster limit in September. From September 1 through the end of the championship season, all Clubs must carry 28 players on the active roster.

-- The number of pitchers a Club may carry on the active roster will be capped at a number determined by the joint committee. Clubs must designate each of its players as either a pitcher or a position player prior to each player’s first day on the active roster for a given season. That designation will remain in effect for the player, and cannot change, for the remainder of the championship season and Postseason. No player on the active roster other than those designated as pitchers by the Club may appear in a championship season or Postseason game as a pitcher except in the following scenarios:

Players designated as a “Two-Way Player.” A player qualifies as a “Two-Way Player” only if he accrues at least 20 Major League innings pitched and at least 20 Major League games started as a position player or designated hitter (with at least three plate appearances in each of those games) in either the current championship season or the prior championship season;

Following the ninth inning of an extra-inning game; or

In any game in which his team is losing or winning by more than six runs when the player enters as a pitcher.

• Minimum Number of Batters for Pitchers: The Office of the Commissioner will implement an amended Official Baseball Rule 5.10(g) requiring that starting pitchers and relief pitchers must pitch to either a minimum of three batters or the end of a half-inning (with exceptions for incapacitating injury or illness). The Players Association has agreed that it will not grieve or otherwise challenge the Office of the Commissioner’s implementation of the amended Rule 5.10(g).

The 3-batter minimum is being criticized but think of it this way. There exists the same rule-presently a ONE batter minimum. The tweak merely increases the minimum. While it feels like a fundamental change, it’s really not. & there will be just as much strategy as ever, trust me

I like all the 2019-2020 MLB rules changes. They got them all right. And yes, they’re gonna shave time off inning breaks which is clear investment in pace of play that could theoretically cost some $ in commercial time. It’s right thing to do to keep our game the best of them all