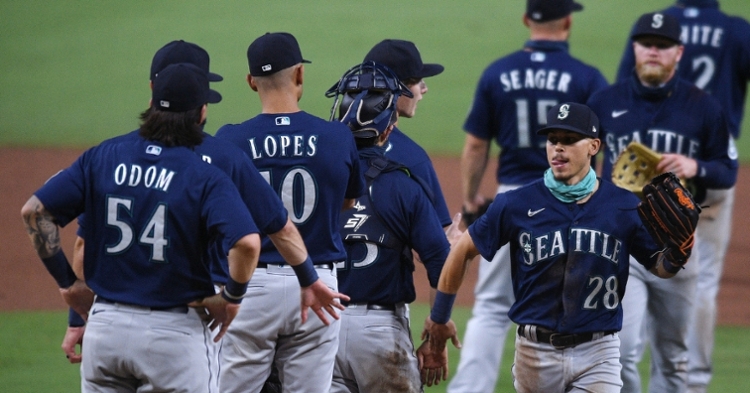 The Seattle Mariners chose not to play in Wednesday's game against the San Diego Padres. (Credit: Orlando Ramirez-USA TODAY Sports)

SAN DIEGO — In the wake of the NBA postponing its Wednesday games and the Cincinnati Reds-Milwaukee Brewers game getting called off due to players protesting the police shooting in Kenosha, Wis., Wednesday's game at Petco Park between the San Diego Padres and the Seattle Mariners has also been postponed.

The Padres released the following statement:

"We understand the Mariners decision to postpone tonight’s game and we support the players’ efforts to use their platform to bring awareness to the very serious issue of racial injustice impacting our country today."

According to reports, Mariners players decided not to take part in the game, so the contest was called off and will be rescheduled. Mariners second baseman Dee Gordon weighed in on Twitter.

Instead of watching us, we hope people will focus on the things more important than sports that are happening.

It is worth noting that the Mariners have the highest number of Black players on their roster of any MLB team, so the current climate surrounding bringing awareness to racial injustice and police brutality through peaceful prosets has likely had a major impact on the Mariners' clubhouse. In addition, Cubs right fielder Jason Heyward chose to sit out his team's game on Wednesday, a day that will not be soon forgotten in the sports world and could potentially have a wide-ranging impact beyond the field of play.

The Seattle Mariners will not play tonight's game against the San Diego Padres after Mariners players agreed to postpone it.

Update: Wednesday's game at Oracle Park in San Francisco between the Los Angeles Dodgers and the San Francisco Giants was postponed shortly after the Mariners-Padres contest was called off. Also of note, Matt Kemp of the Colorado Rockies and Jack Flaherty and Dexter Fowler of the St. Louis Cardinals decided not to play on Wednesday in protest over racial injustice.

The Giants have post-poned its game tonight against the Dodgers in light of the nationwide boycots. #SFGiants @kron4news