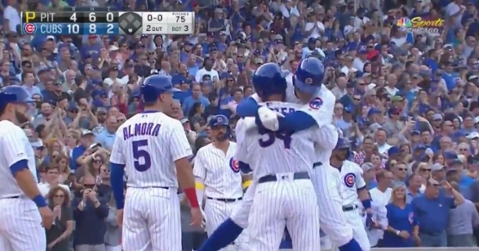 With the 10th grand slam of the season for the Chicago Cubs, Anthony Rizzo went yard in the third inning on Friday.

CHICAGO — Marking the 10th grand slam of the Chicago Cubs' 2019 season, which is a franchise record, Cubs first baseman Anthony Rizzo made history by hitting a bomb in the third inning on Friday. Putting the Cubs up 10-4 over the Pittsburgh Pirates at Wrigley Field, Rizzo picked up his 26th dinger of the year.

Coming with the bases loaded, the round-tripper hit out to right field ended Pirates starter Steven Brault's dismal outing, as it was the fifth homer given up by Brault on the afternoon. Leaving the bat at 111 miles per hour, the lined shot carried 390 feet out of the park in a hurry.