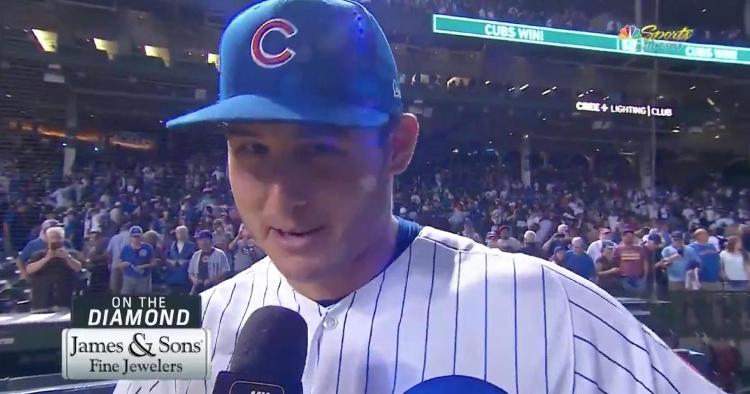 Showing off his big heart, "Big Rizz" wished his mom a happy birthday at the end of his on-field interview.

CHICAGO — The Chicago Cubs defeated the San Francisco Giants 5-3 at Wrigley Field on Tuesday, and Cubs first baseman Anthony Rizzo was the driving force behind the North Siders' victory. Rizzo hit a pair of home runs as part of a 3-for-3 showing and tallied three runs scored and two RBI in the Cubs' first outing since finishing up a 10-game road trip.

"It's electric playing here," Rizzo said in his postgame interview with NBC Sports Chicago's Kelly Crull, "and we feed off the energy. It's nice to be back and nice to start out with a win."

As of late, Rizzo has heated up at the plate after enduring a hitting slump for several weeks following the All-Star break. With two dingers on the night, Rizzo reached the 25-homer mark for the season, and he spoke with Crull about his offensive uptick after the win.

"You have ups and downs in the season," Rizzo said. "You're going to have a power surge. And you just stay with the process. It sounds super cliche, but that's what I try to always do."

The highlight of Rizzo's chat with Crull came at the end, when he wished his mother a happy birthday. Giving his mom an early birthday shoutout, Rizzo was even respectful enough to not mention his mom's age, making for a perfect moment that Rizzo's mother assuredly appreciated.

"I just want to say happy birthday to my mom," Rizzo said into the camera with a smile. "She's got a big birthday coming up. I love you, Mom."

Awww, Anthony Rizzo gives a shoutout to his mom after a big night at the plate ?? (@JAndSJewelers) pic.twitter.com/mL4ateQrVK