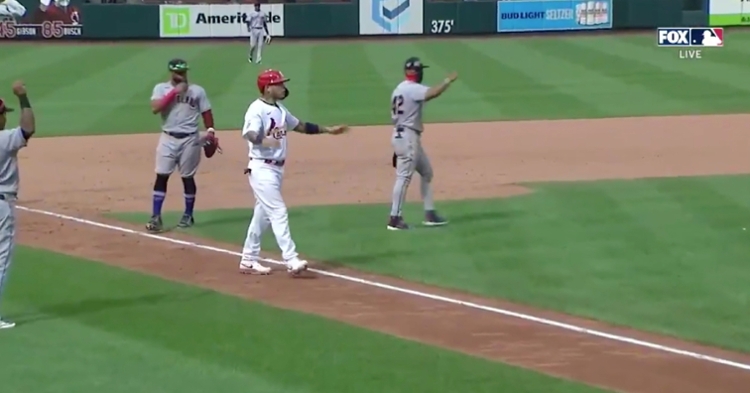 Yadier Molina was baffled after a chopper hit by Matt Carpenter was ruled fair, leading to a game-ending double play at Busch Stadium.

ST. LOUIS — An extra-inning affair between the Cleveland Indians and the St. Louis Cardinals ended quite strangely on Saturday afternoon, as an uncharacteristically boneheaded mistake by veteran catcher Yadier Molina did the Cardinals in. With Molina at third base with one out and the Indians ahead by one run in the bottom of the 12th, a unique double play ended the game.

The Cardinals' Matt Carpenter hit a chopper that Indians first baseman Carlos Santana fielded right behind the bag, making it a fair ball, but Molina thought that the ball was foul. After stepping on first, Santana caught Molina in a pickle between third and home. Molina was tagged out soon afterward, providing the Indians with a 2-1 win on the road via a rare 3-5-3 double play.