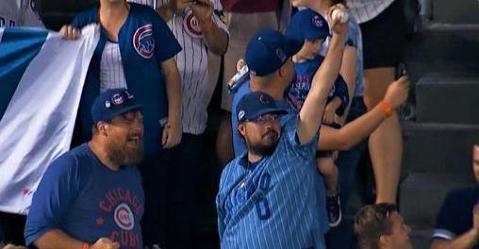 The Chicago Cubs had a wonderful walk-off win against the Reds on Tuesday night, courtesy of Kyle Schwarber's blast in the 10th inning.

Schwarber hit his 21st homer of the season as the baseball was laying in the basket hanging over the outfield walls at Wrigley Field. Two young kids were reaching for the epic souvenir and an adult fan with a custom 'Mai Tai Guy' jersey sitting next to them stretched over and grabbed it away from them.

Obviously, the home run ball is fair game but the optics of an adult taking it away from two kids that were going for it looks horrible. Nobody knows for sure what they would do in that moment, but I would hope that I would take a deep breath and give it to one of the kids for a cherished keepsake for a lifetime.

Hello @FBI please arrest this man for stealing the ball from 2 kids. pic.twitter.com/eLrwt2jN1Z

I think it’s safe to say that I speak for all @cubs fans here when I say that we renounce the rights to Mai Tai Guy. Bro straight up taking a ball from kids in the basket isn’t cool.