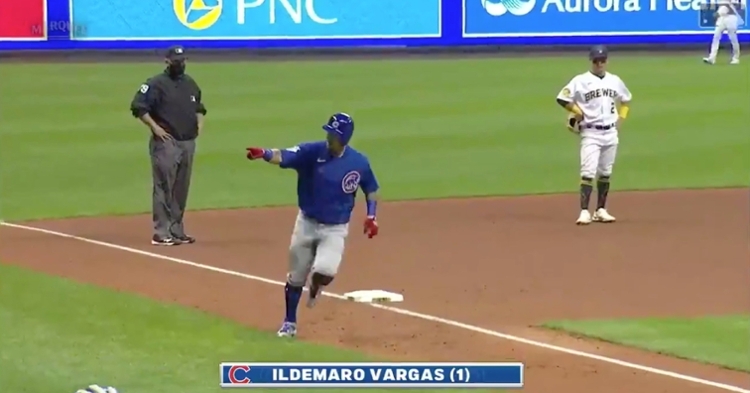 Ildemaro Vargas tacked on an insurance run via his first dinger in a Cubs uniform.

MILWAUKEE — Providing the Chicago Cubs with an insurance run after Jason Heyward drilled a go-ahead three-run blast in the top of the ninth on Saturday, Ildemaro Vargas went yard for the first time in a Cubs uniform. In the at-bat that followed Heyward's ninth-inning dinger at Miller Park, Vargas smoked a 401-foot solo shot out to left field for his first Cubs RBI.

Vargas was recently added to the Cubs' roster, and he started on the infield against the Milwaukee Brewers on Saturday night. Brewers reliever Josh Hader, who blew the save opportunity, gave up both ninth-inning home runs. He was taken deep by Vargas on a full count. Each of the homers came with two strikes. Prior to Saturday, Hader had never given up two round-trippers with two strikes in any appearance in his career. A late scratch of Cameron Maybin, who came down with an illness, was the only reason that Vargas started on the night, as the Cubs shuffled their starting lineup and inserted Vargas into the game.