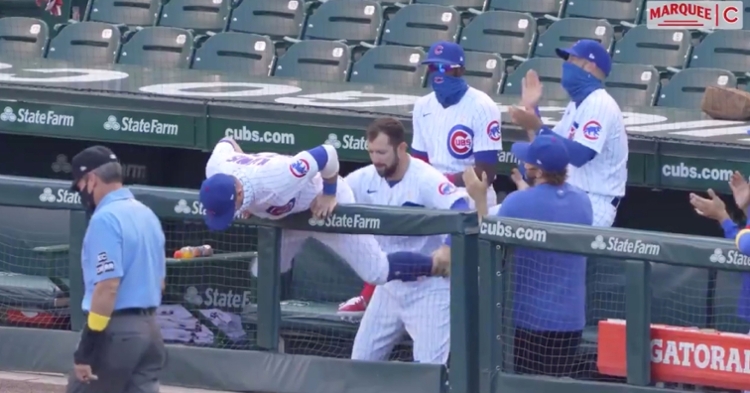 During the Chicago Cubs-St. Louis Cardinals game at Wrigley Field on Saturday, a funny dance routine was performed.

CHICAGO — A staple of the Chicago Cubs' 2020 campaign is the dugout clapping and dancing to Anthony Rizzo's catchiest walkup song. Indeed, "Intoxicated" by Martin Solveig has elicited plenty of viral moments in the Cubs' dugout, and, on Saturday, it inspired Jason Kipnis and Steven Souza Jr. to perform a weird dance routine.

In the midst of the players clapping along to the tune, Kipnis started hopping around like a penguin before abruptly leaning over the dugout railing. Souza took advantage of that opportunity by pulling off the never-before-seen "cleat clap," as he repeatedly slapped Kipnis' cleats into one another while Kipnis clapped his hands in unison. As to whether or not the hilarious routine was choreographed or spontaneous will likely remain a mystery.

The @Cubs create their own energy! pic.twitter.com/pAUlL3ZCJp