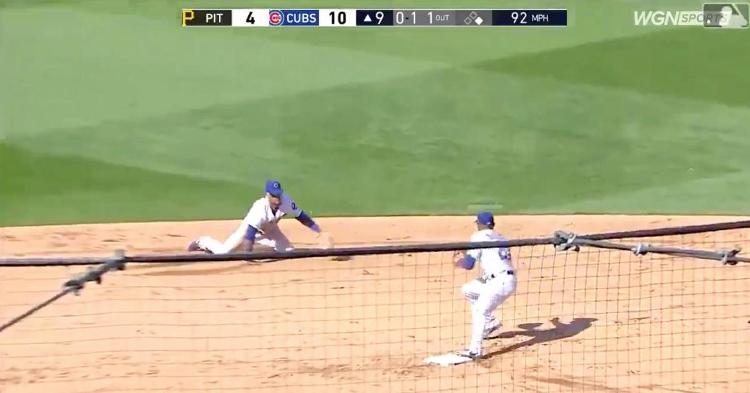 Javier Baez pulled off a jaw-dropping diving stop and ensuing glove flip as part of a game-ending double play.

CHICAGO — Capping off the Chicago Cubs' rout of the Pittsburgh Pirates in style, Cubs shortstop Javier Baez came through with an epic web gem that was part of a game-ending double play on Saturday. Inciting a roar from the Wrigley Field faithful, Baez sparked a 6-4-3 double play that secured the Cubs' 10-4 victory over the Buccos.

With a runner on first and one out in the top of the ninth, Pirates second baseman Kevin Newman smacked a one-hopper up the middle that Baez was somehow able to snag while diving to his left. Baez then flipped the ball out of his glove and right to Cubs second baseman Addison Russell, who, after stepping on second, fired to Cubs first baseman Anthony Rizzo, thereby finishing off the spectacular double play.

All the offense was great yesterday but can we talk about that game-ending double play? The @javy23baez & @Addison_Russell combo is straight ??????! #NVRQT