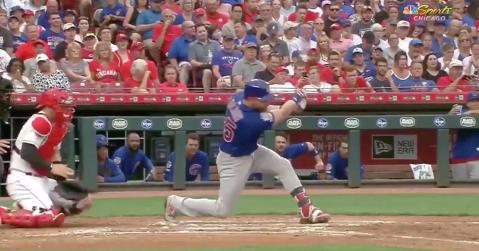 Jonathan Lucroy became 1-for-1 at the plate as a member of the Cubs with a second-inning single on Thursday.

CINCINNATI — In his first at-bat with the Chicago Cubs, recently signed catcher Jonathan Lucroy collected his first hit as a Cub. With two outs in the top of the second, Lucroy hit a single against the Cincinnati Reds at Great American Ball Park.

Lucroy was signed by the Cubs on Wednesday and made the start behind the plate on Thursday, making an immediate impact with a bat in his hands by way of a 2-out base knock to left field. The veteran catcher was left stranded in the top of the second, though, as he was tagged out on an ensuing grounder.