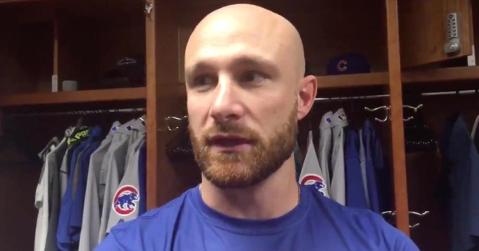 Veteran catcher Jonathan Lucroy spoke to the press prior to playing his first game with the Chicago Cubs.

CINCINNATI — Veteran catcher Jonathan Lucroy was signed by the Chicago Cubs on Wednesday in order to address the team's need at the catcher position with starter Willson Contreras currently out due to injury. Lucroy, who is taking part in his 10th big-league season, was recently cut by the Los Angeles Angels before inking a deal with the Cubs.

Lucroy spoke to the media at Great American Ball Park after joining the Cubs for their series against the Cincinnati Reds. Interestingly, Lucroy has played with several members of the Cubs' roster at some point during his career, whether it be in MLB or for Team USA, and he indicated that he would have no problem jelling with the North Siders.