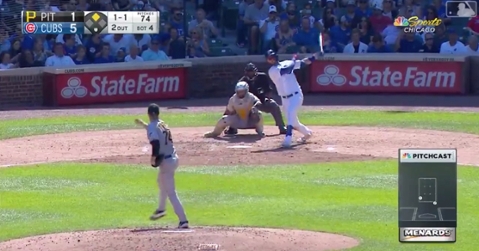 Kris Bryant matched Ernie Banks for the most home runs hit by a Cubs player in his first five seasons of action.

CHICAGO — Tying Chicago Cubs legend Ernie Banks for the most home runs hit by a Cub through the first five seasons of big-league action, Cubs third baseman Kris Bryant whacked a 2-run dinger out to left-center on Saturday. Marking the 136th homer of Bryant's career, the 2-run jack put the Cubs up 7-1.

Going yard off Pittsburgh Pirates starter James Marvel, Bryant smacked a 367-footer in the bottom of the fourth at Wrigley Field. Additionally, the blast served as the 235th long ball of the season for the Cubs, which equaled the 2004 Cubs for the franchise record.

Kris Bryant ties Ernie Banks for most home runs as a Cub through fifth season (136), and Cubs tie 2014 franchise record of 235 home runs.