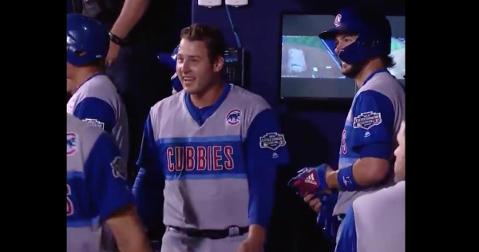 Anthony Rizzo proclaimed that he made his best contact of the season when he hit his 2-run home run on Sunday.

WILLIAMSPORT, Pa. — ESPN's Sunday Night Baseball crew made the wise decision to clip a microphone onto Chicago Cubs first baseman Anthony Rizzo's jersey for Sunday's MLB Little League Classic at BB&T Ballpark at Historic Bowman Field. Rizzo went 1-for-2 with three walks and the highlight of his outing was a jaw-dropping 2-run home run that he hit in the top of the fifth.

Since he was mic'd up, Rizzo was captured thanking his home-run ball after it clanged off the scoreboard behind left-center field. In the dugout, Rizzo proclaimed that it was the best ball that he had hit all year and also talked about how "sick" the Cubs' customized jerseys for the special occasion were. Additionally, Rizzo chatted with some of the little leaguers sitting in the seats near field and discussed the Little League action that he had a chance to watch earlier in the day, as well.