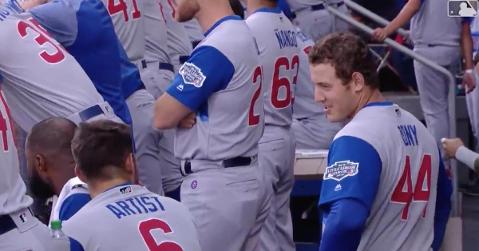 Only Anthony Rizzo would think to ask someone if a hot dog is a sandwich in the midst of a game being played.

WILLIAMSPORT, Pa. — Known as the class clown of the Chicago Cubs, first baseman Anthony Rizzo was mic'd up by ESPN for the Little League Classic on Sunday night. Naturally, Rizzo made several hilarious comments, and ESPN aired some of them on its Sunday Night Baseball broadcast of the Cubs' matchup with the Pittsburgh Pirates at BB&T Ballpark at Historic Bowman Field.

On two separate occasions, Rizzo trolled teammate Nicholas Castellanos, who started in right field for the Cubs on the evening. In addition to asking a perplexed Castellanos if a hot dog is a sandwich, Rizzo asked the recently acquired Cub, who suffered through several seasons playing for bad Detroit Tigers teams, if he was playing in a Sunday Night Baseball game for the first time.