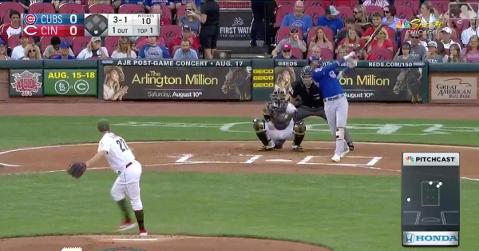 A little over a week into his Cubs tenure, Nicholas Castellanos powered out his fourth home run as a North Sider on Friday.

CINCINNATI — After going yard twice on Thursday, Chicago Cubs right fielder Nicholas Castellanos remained on fire at the plate by crushing a first-inning solo home run on Friday. Putting the Cubs up 1-0 on the Cincinnati Reds at Great American Ball Park, Castellanos tabbed his fourth dinger with the Cubs.

Smacking a 396-footer out to center field, Castellanos took Reds starter Trevor Bauer deep on a four-seamer. The solo jack was skied off the bat at 32 degrees and sported an exit velocity of 102 miles per hour. Interestingly, in his career, Castellanos has faced off against Bauer more than any other pitcher in baseball.