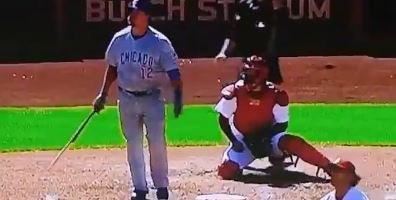 Chicago Cubs slugger Kyle Schwarber smacked a three-run homer to put the Cubs up 5-4 against the Cardinals in the seventh inning. It was his first regular season home run since 9/12/2015 and his third career homer off of a left-handed pitcher.

Check out the monster blast that had a velocity off the bat of 112 MPH and traveled 404 happy feet.