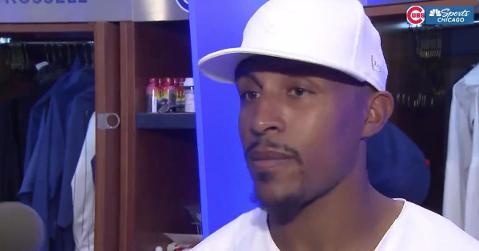 Evidently, Chicago Cubs second baseman Tony Kemp is not much of a fan of the Cubs' all-white uniforms.

CHICAGO — The Chicago Cubs' all-white uniforms for 2019 MLB Players' Weekend have received substantial feedback from fans, with practically none of it being positive feedback. Clearly, Cubs second baseman Tony Kemp is not too thrilled with the special getups, either, as he had a hilarious reaction when asked about the uniforms following Saturday's game.

At the end of Kemp's postgame press conference that followed the Cubs' 7-2 loss to the Washington Nationals at Wrigley Field, Kemp replied with "no comment" when asked what he and his Cubs teammates thought about the all-white uniforms. Kemp smirked as he looked down at his colorless jersey before avoiding answering the question and walking away.

Ironically, Kemp was the lone bright spot of the Cubs' loss on Saturday, as he showed out on defense with several spectacular plays. However, despite serving as the Cubs' bright spot, Kemp is not keen on the Cubs' bright uniforms. Thankfully for Kemp and his compatriots, they will be forced to wear the all-white uniforms for just one more game, as Players' Weekend concludes after Sunday's action.