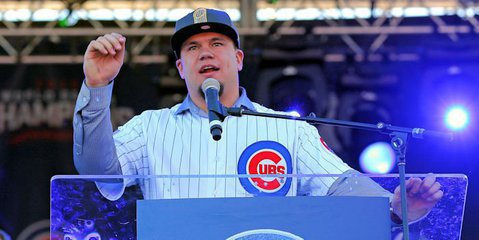 Chicago Cubs outfielder Kyle Schwarber can rake offensively and a potential superstar since he has flashed with the Cubs in his first two seasons at the major league level.

However, ESPN released their latest article and stated that Schwarber has something to prove for the Cubs this year among all the players on the current roster.

"For all the well-earned attention Schwarber received after returning to the Cubs for the World Series, we still haven't seen him play the field," ESPN said. "That will be an area of interest early in the spring, as Chicago figures out a new outfield mix that no longer includes Dexter Fowler or Jorge Soler. On top of that, as much as Schwarber looks like a hitting savant, his career average against lefties is .143. The Cubs are deep enough to platoon, but Schwarber is such a good hitter that it seems like he should be able to figure out the southpaws. Chicago manager Joe Maddon thinks so, too. After all, he allowed Schwarber to face Andrew Miller four times during the World Series. Finally, during the spring we're likely to get our first extended look at Schwarber as a leadoff hitter, one who is unorthodox in appearance but ideal in on-base percentage."

During the 2016 World Series, he hit .412 with seven hits, a double and two RBIs to help the Cubs win their first World Series in over 100 years.