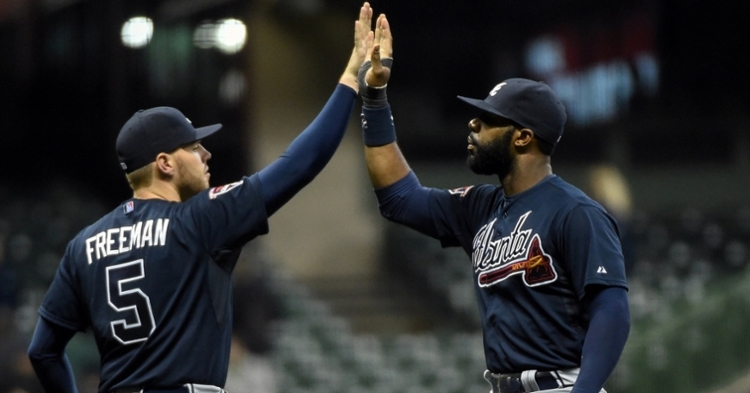 Freddie Freeman (left) and Jason Heyward (right) came into the league together with the Atlanta Braves in 2010. (Credit: Benny Sieu-USA TODAY Sports)

MILWAUKEE — Chicago Cubs right fielder Jason Heyward played for the Atlanta Braves from 2010-14, making an All-Star Game appearance in his rookie season and winning two Gold Glove Awards while in Atlanta. Heyward is still close with some of his former Braves teammates, including star Braves first baseman Freddie Freeman.

Heyward stepped up in a major way in the Cubs' clash with the Milwaukee Brewers on Saturday, swatting a go-ahead three-run blast in the top of the ninth that proved to be the winning hit. The Cubs went on to win 4-2 at Miller Park, and Heyward's sixth homer of the season broke the Cubs out a scoring slump that included a 1-0 shutout loss to the Brewers on Friday.

In his postgame press conference, Heyward revealed that Freeman inspired him to go yard on the evening, as Freeman celebrated his 31st birthday on Saturday. Evidently, Freeman promised Heyward that he homer on Heyward's birthday, which was Aug. 9, and he did, so Heyward made a promise to himself that he would hit a dinger on Freeman's birthday, which he did. Heyward told reporters that he planned on texting Freeman to effectively dedicate the three-run round-tripper to his birthday, making for an awesome moment shared between former teammates.

Read the full transcription of Heyward's exchange about Freeman:

Check out the highlights of Heyward's go-ahead three-run jack: