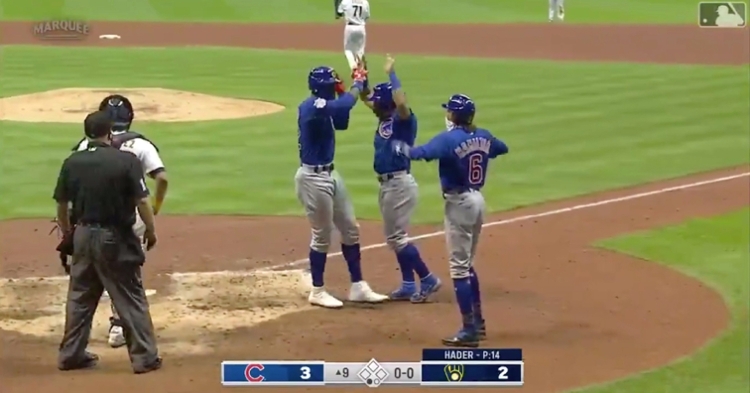 Jason Heyward clobbered a 416-foot three-run shot that put the Cubs up 3-2 in an eventual 4-2 victory.

MILWAUKEE — The Chicago Cubs came from behind to beat the Milwaukee Brewers on Saturday, scoring four runs in the top of the ninth en route to winning 4-2 at Miller Park. Right fielder Jason Heyward recorded a go-ahead three-run homer that provided the Cubs with their first lead of the series.

Heyward's three-run round-tripper snapped the North Siders' 17-inning scoreless stretch against the Brew Crew in the three-game set, which began on Friday. Fireballer Josh Hader gave up the dinger to Heyward, which marked Heyward's first long ball of the season against a left-hander.

Play-by-play announcer Pat Hughes of the Cubs' radio team was fired up when "J-Hey" went yard. Listen to his home run call below.

One mighty swing turns the game around. Audiobook narrated by Pat Hughes. pic.twitter.com/HSJAtegQo8