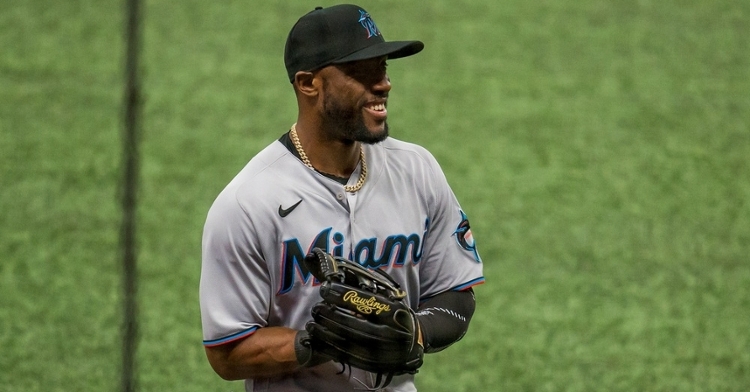 CHICAGO — A pitch that got away from Chicago Cubs reliever Dan Winkler hit Miami Marlins center fielder Starling Marte on his left hand in Game 1 of the Wild Card Series at Wrigley Field. Marte was in obvious pain after the ninth-inning hit by pitch, and he was subsequently removed from Wednesday's game.

Marte went 2-for-4 at the plate in the Marlins' 5-1 victory over the Cubs, and his status for Game 2 is questionable, as he suffered a non-displaced fracture in his left pinkie finger. ESPN reported the news and also reported that there is optimism that Marte will be able to play with the injury, as it occurred on his non-throwing hand.

On Sunday, Marte was inadvertently beaned in the helmet with a pitch but dodged a bullet, as he was able to make the Marlins' Wild Card Series roster. Marte may have dodged another bullet, and the Marlins assuredly hope so, as his absence from the lineup would be a major blow to the Fish.

Marlins outfielder Starling Marte suffered a non-displaced fracture of his left pinkie after being hit by a pitch in the ninth inning, sources tell me and @JesseRogersESPN. There is optimism that Marte could continue playing through it.

A scary moment in New York, as @Marlins OF Starling Marte is hit by a pitch on the bill of his helmet and has to exit the game. pic.twitter.com/HbwNv4UDoZ