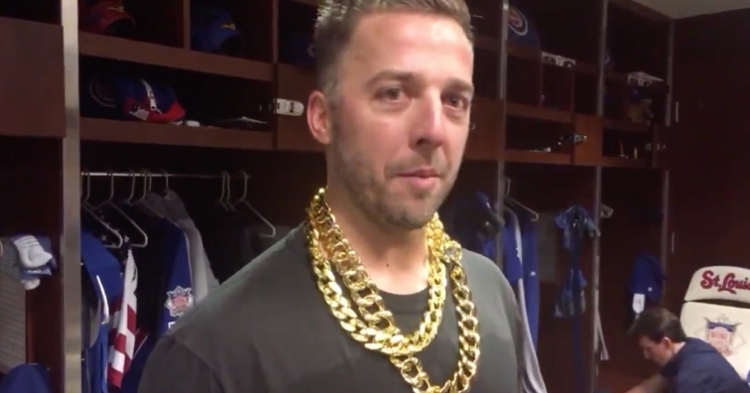 A certified goofball, fun-loving Chicago Cubs reliever Brandon Kintzler poked fun at a fellow member of the Cubs' bullpen during his postgame interview.

ST. LOUIS — In addition to being the funniest member of the Chicago Cubs' roster, Brandon Kintzler has been the Cubs' most reliable reliever in 2019. On Saturday night, Kintzler notched his first save as a member of the Cubs, as he toed the rubber in place of closer Craig Kimbrel, who had already been shut down for the remainder of the season.

Kintzler hit a batter with his very first pitch in the bottom of the ninth, but he drew three outs in three consecutive at-bats after that and finished off the Cubs' 8-6 win over the St. Louis Cardinals at Busch Stadium. In typical Kintzler fashion, he added some flare to his first save with the North Siders by wagging his finger in the direction of the Cardinals' dugout after collecting the final out.

After the game, Kintzler joined several of his teammates in making a mockery of fellow Cubs reliever James "Big Drip" Norwood, who, evidently, frequently wears gaudy chains around his neck. While sporting several oversized necklaces, Kintzler discussed his rationale for wagging his finger, saying that it was partially done because of Cardinals catcher Yadier Molina's outburst, which took place after Molina was hit by a pitch earlier in the game. Kintzler also added that it was all in good fun and emblematic of a great rivalry.

Brandon Kintzler on wagging his finger after saving tonight’s Cubs win over the Cardinals.

(As for the chains, relievers were wearing them today as an inside joke aimed at James “Big Drip” Norwood.) pic.twitter.com/zOoOLCKlTd