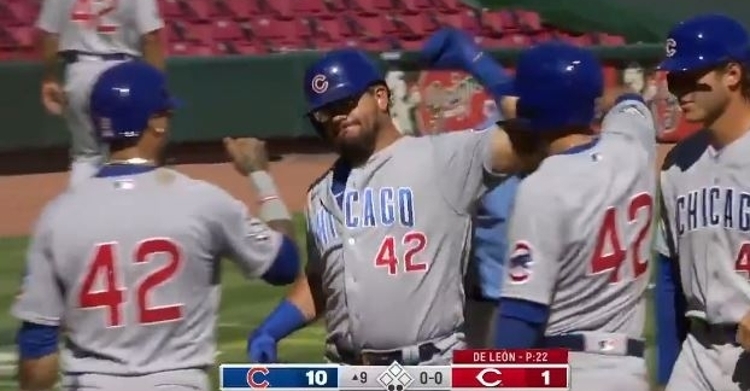 The Chicago Cubs showed their big-time power potential as they impressively launched six homers against the Cincinnati Reds on Sunday.

In the ninth inning, Kyle Schwarber crushed a 444-foot grand slam to put the Cubs up a convincing 10-1.

"My goodness, that ball was completely disrespected," Jim Deshaies said on air watching the laser of a homer run.

The Cubs had three players hit two homers a piece with Schwarber, Jason Heyward, and Ian Happ. This tied an MLB record done several times, dating back to 1901 according to ESPN Stats & Info.

The Cubs are also the first team in MLB history to have all three starting outfielders hit two homers in the same game.

Check out the historic blast below:

Check all the homers from the series by the Cubs:

Maybe the @Reds will ship our home run balls to the #Cubs fans who would have been sitting in those seats this weekend? ?? pic.twitter.com/8O3aUTGV5O

WATCH: Anthony Rizzo walks out of Wrigley Field after being traded

WATCH: Anthony Rizzo and his family walking around Wrigley Field after trade