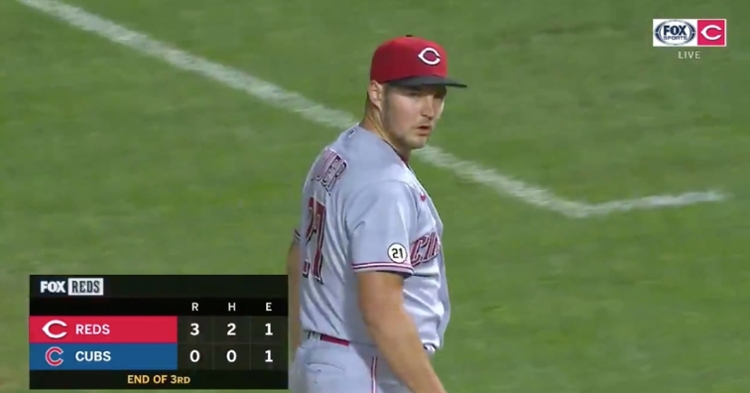 Reds hurler Trevor Bauer was his usual confrontational, fiery self on Wednesday night.

CHICAGO — In Wednesday's 3-0 Cincinnati Reds victory over the Chicago Cubs, Reds ace Trevor Bauer dominated the Cubs in his 7 2/3 innings pitched, striking out 10, issuing zero walks and giving up just three hits. Bauer was up to his normal antics, though, chirping at the Cubs' dugout from time to time and taunting the team as he left the mound for the final time.

Bauer's most contentious moment at Wrigley Field on Wednesday night came at the end of the third inning, when he struck out Cubs center fielder Ian Happ. Happ went around on strike three, unable to check his swing in time, and the third plate umpire called him out. As Bauer walked off the hill and Happ headed for the dugout, the two exchanged words following the inning-ending strikeout.

A combination of Happ not being pleased at himself for going around on a pitch that would have otherwise been called a ball and his irritation at Bauer's bravado in the wake of the punchout led to the Cubs slugger barking over his shoulder at Bauer. Needless to say, the hot-headed starting pitcher barked back, but nothing substantial came of the tense moment.

Trevor Bauer had some words?? ?? pic.twitter.com/Im7ILTduPm

The chirping continued, though, leading to Bauer's viral postgame comments disparaging the Cubs. Thursday's contest marks the final meeting of the regular season between the Cubs and the Reds, meaning that the National League Central's most heated rivalry of 2020 will be coming to an end, unless the two teams meet up in the playoffs. The North Siders lead the season series 5-4, meaning the Cubs will look to win the season series on Thursday and have the last laugh on Bauer.