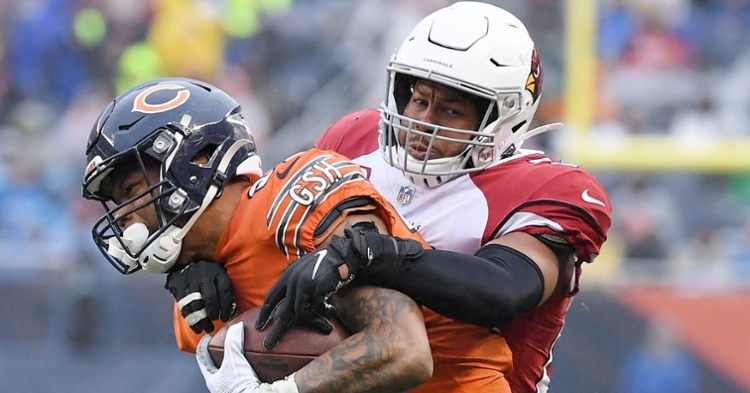 On what was a wet and rainy day at Soldier Field on Sunday, the Bears welcomed the Arizona Cardinals, looking to remain atop the NFC standings. After their recent win against the Lions, the Bears finally had that good feeling of winning a football game again as they moved within one game of the final postseason spot.

For the Bears to continue their climb up the standings, they need to focus on winning the remainder of their games, which needed to start with the Cardinals. Chicago knew it was going to be a challenge, especially when you look at how well the Cardinals have played at Soldier Field in the past, but what better way to earn a statement win than by topping the best team in the NFL record-wise.

That was the Bears mindset going in, but that wasn't the result they came away with as Andy Dalton suffered a horrendous game under center. Despite the Bears outgaining the Cardinals on the afternoon, Dalton did the team no favors as he threw four interceptions which allowed them to have short fields on nearly all of their possessions. That along was too much for them to overcome as the Cardinals continue to go about their business, topping the Bears 33-22 and sending them to 4-8.

Going back to last season, you had a Cardinals team that was the last playoff team in the NFC with two weeks to go. That was until they dropped their final two games and missed the postseason with the Bears sneaking in over them. Arizona used that heartbreak to fuel them this season, leading to an NFL-best 10-2 mark thus far.

Yes, the Cardinals made plenty of offseason acquisitions to help them, but some of those acquisitions have been out due to injuries, which shows you how talented this team is and how well the coaching staff has done this season. A big reason for their success this season has been their perfect 7-0 mark on the road.

Not only that, but the Cardinals are just the second team in NFL history to win their first seven road games by at least 10 points joining the 1968 Cowboys as the only other team to accomplish that feat. With all the talk of home-field advantage and how important it is to have, the Cardinals may be one of those teams who would benefit from going on the road in the postseason.

Should Nick Foles have gotten in the game?

Dalton was named the starter for the second week in a row with Justin Fields nursing sore ribs. After two good showings under center, Dalton picked the worst time to have his worst game of the season as his four interceptions were too much for the Bears to overcome.

Had those interceptions not happened, things would have been different as two of those picks killed drives that would have resulted in most likely a field goal each time.

Matt Nagy stuck with Dalton despite his struggles as he didn't have Fields healthy enough to turn to. However, he does have another QB named Nick Foles sitting on the bench as he hasn't seen the field this season. Foles may not be the most skilled player, but one thing he does exceptionally well is come off the bench as a reliever to play good football.

No one is saying the Bears win this game, but when you have a QB throwing four interceptions, it is time to bring in a different look. Foles is that different look, and coming off the bench is a familiar role. He may have at least protected the ball a little better and could have given the Bears a few more points.

There hasn't been much to get excited about when it comes to the Bears this season, but David Montgomery is one of them. The now third-year running back out of Iowa St. is coming off a 1000 yard season in 2020 and has upped his level of play this season. Despite missing some time with a knee injury, Montgomery is still on pace to surpass the 1000-yard plateau again, which would make him the first back since Matt Forte to have consecutive 1000 yard seasons.

To go with hard running, Montgomery is starting to get more involved than ever and is filling the void that Tarik Cohen had. He has been the offense's focal point for most of the season, and yesterday he again put that on display. There were several drives during the game where Montgomery was not only carrying the football, but was Dalton's first option in the passing game just to pick up positive yardage.

Many people were saying that Montgomery was a third-round steal, but no one expected him to be this good so quickly. Montgomery is the one consistent offensive piece the team can count on in a year that continues to be disappointing. He will make a nice pairing with Fields for the future as those are the offensive pieces the Bears need to build around.