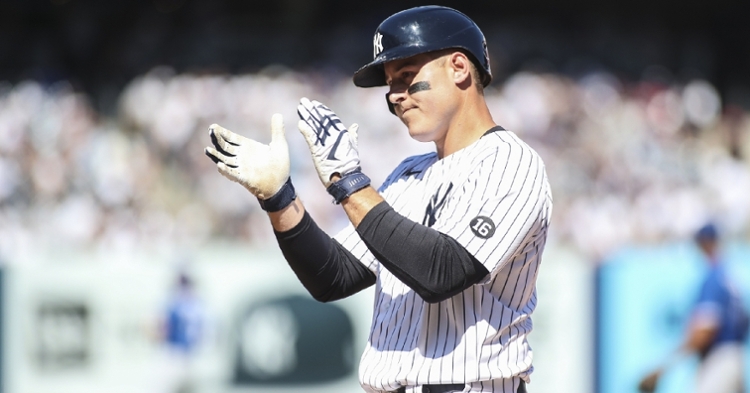 Rizzo re-signed with the Yankees on a two-year deal

As the rumor mill continued to spin on Tuesday, reports surfaced that hinted at the Cubs potentially reuniting with first basement Anthony Rizzo. Late Tuesday night though, it was announced by Jon Heyman and Ken Rosenthal that Rizzo had resigned with the Yankees for two years.

While the announcement that the Cubs had interest in bringing back Rizzo was warmly welcomed by Cubs fans, ultimately Rizzo ended up back where the Cubs sent him last July — New York.

The fit on the team is clearly still there. Rizzo is a strong contact based left handed bat with plus power, and he is an excellent defender — not to mention the National League now has a designated hitter so Rizzo could hit if he needed a day off still.

The concerns with Rizzo come with his age, as he is now into his thirties with some declining production. In addition, Rizzo has had a history of back injuries over the course of his career.

But it almost felt as if the Cubs owed Rizzo a contract after all he did in Chicago. Rizzo arrived as one of the first moves of the Theo Epstein, Jed Hoyer era — one of the first dominos to fall that led the Cubs to a World Series Championship.

Rizzo was named to three all-star games, won four Gold-Gloves, a Silver Slugger award and he placed top-20 in MVP voting five times. Not to mention, Rizzo also is a World Series champion, catching the final out of the 2016 World Series

The Cubs traded Rizzo at the 2021 July trade deadline, and he became a part of a free agent class cluttered with former Cubs, including Kris Bryant, Kyle Schwarber, Nicholas Castellanos, Joc Pederson and Jorge Soler to name a few.

On Rizzo’s team friendly deal with the Cubs, he was making less than 20 million dollars per year. The deal was backloaded, and when time for contract negotiations approached Rizzo was underwhelmed with what the Cubs offered,

The Cubs reported offer to Rizzo was four or five years for 70-80 million dollars, which would make his yearly average somewhere between 14 and 20 million per year.

Rizzo was frustrated with the offer, and many Cubs fans shared his frustration — thinking the World Series hero earned more money despite what his future projections were. While the concerns remained with Rizzo, the fit on the field was well documented. Not to mention, Rizzo is a massive fan favorite with contributions to the franchise that are immeasurable.

Plus, Rizzo has numerous ties in the city of Chicago. Restaurants and hospitals are stamped with his name on them, but ultimately New York is where Rizzo will reside.

However, it wasn't to be as the Yankees signed Rizzo for two years and 32 million dollars, with an opt-out after one year. Rizzo would make 16 million per year — meaning his bet on himself may have not worked out.

Jed Hoyer said that the offers he made former Cubs in extension talks that were declined will hold up well on the open market. So far, Hoyer’s offers to Javier Baez and Rizzo exceed what they made in free agency.

As much as Cubs fans wanted Rizzo to return to Chicago and as much as they might miss him — maybe Hoyer was right?