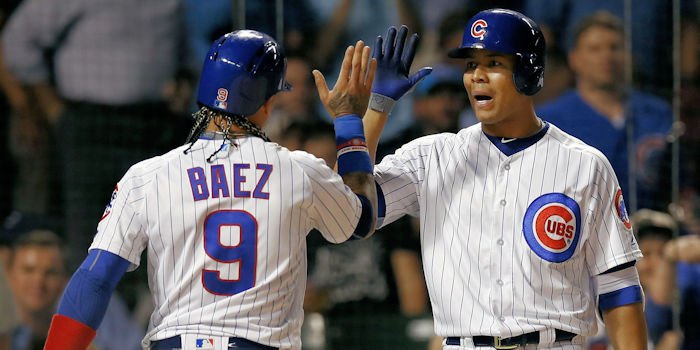 CHICAGO — Like the previous two games in the series between the Chicago Cubs and the Milwaukee Brewers, Saturday's clash of National League Central foes was a war of attrition, with adept pitching and limited hitting serving as the themes of the game.

Winning by a score of 3-0, the Cubs made the most of a stellar performance from starting pitcher Jose Quintana. Much like fellow Cubs starter Yu Darvish, Quintana had been struggling coming into this series, and, also like Darvish, he used his start against the Brew Crew to showcase just how dangerous he can be.

Pitching seven scoreless innings of two-hit ball, Quintana struck out seven and walked only one, making the Brewers' offense virtually listless in game three of the four-game affair. His counterpart, Brewers starting pitcher Junior Guerra, was nearly as dominant himself, allowing only one run and three hits in six innings on the hill.

After two and a half hitless, scoreless innings, the Cubs struck first in the bottom of the third, with the one-two punch at the top of the Cubs' batting order coming through. First, leadoff man Albert Almora, Jr., singled to left with two outs. Thereafter, Javier Baez picked up his National League-leading 26th RBI of the season via a clutch double to right-center that scored Almora and put the Cubs ahead 1-0. Baez also came up with one of the best web gems of the season on a diving stop at shortstop and a resulting impeccable throw to first on a groundout in the fourth frame.

The Brewers had a chance to even the score in the fourth but failed to do so. Center fielder Lorenzo Cain smacked a double to center field and took third soon afterward on a wild pitch by Quintana. However, Quintana stood his ground, and the Brewers failed to get the ball out of the infield for the remainder of the inning, leaving themselves scoreless.

With his pitch count nearing 100, Guerra was pulled by Brewers manager Craig Counsell after the sixth inning, as Oliver Drake relieved him on the mound. The pitching change proved costly for Milwaukee, with Drake giving up three consecutive hits to start the bottom half of the seventh, providing Chicago with a commanding 3-0 lead.

Fresh off a disabled-list stint, Ben Zobrist sparked the run for the Cubs, leading off with a single to center. Thereafter, right fielder Jason Heyward crushed a double to deep center field that placed men on second and third for Chicago. In the next at-bat, Tommy La Stella produced in a pinch-hitting spot, accruing two RBI on a single to shallow left.

The Cubs (14-10) held strong thereafter, with three Chicago relievers combining to force the Brewers (16-12) into a three up, three down ninth inning, securing the 3-0 shutout win for the North Siders. Quintana received a much-needed win for his efforts, becoming 3-1 overall on the season.