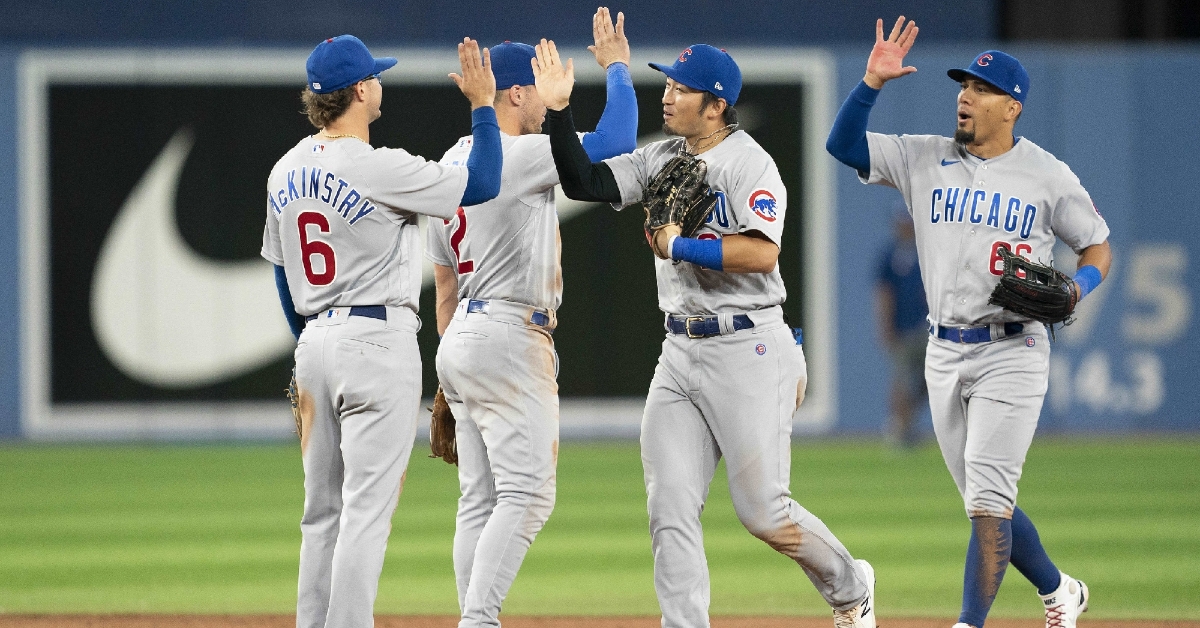 TORONTO - Most of the 2022 season has been a struggle for the Chicago Cubs (56-75), as most fans expected it to be. You wouldn't have guessed it based on August, as this was quietly one of their better months of the season. Yes, I understand playing .500 isn't going to get you anywhere, but when you are 19 games under .500, having a month of .500 baseball is a significant improvement.

Looking to close out their series against the Toronto Blue Jays (70-59) with a win at the Rodgers Centre, the Cubs have to be frustrated by what has happened this week. Not only have they scored first in each game, but they had the lead in the seventh inning or later in both games, only to see the bullpen let it get away.

After racing out to another early lead, the Cubs bullpen continued to struggle as they allowed the Blue Jays to erase not only a five-run lead, but a four-run lead to pull within 6-5 late. Fortunately for the Cubs, they managed to hold them off this time as they closed out the month of August on a positive note with a 7-5 win.

Making his second start and third appearance with the Cubs this year, Luke Farrell as Chicago ultimately went with a bullpen game. Farrell got through the first two innings, but he did allow a pair of runs before Manny Rodriguez and Mark Leiter Jr gave the Cubs three scoreless frames. Their efforts on the night were critical as the Cubs came out swinging against Mitch White, who had his worst start of the season.

Despite pitching into the fifth, White was unable to get through the fifth as he allowed six earned runs in 4 2/3. Chicago wasted little time getting the scoring started, with Seiya Suzuki picking up the one-out double and coming home to score on an Ian Happ single to make things 1-0. The Cubs would add to their lead in the second when Yan Gomes and Alfonso Rivas reached base consecutively before a delayed double steal allowed Gomes to come home to double the early lead.

Things continued to get worse for Toronto in the third when Zach McKinstry led off the inning with a triple before he was gunned down later in the inning trying to score on a chopper to second. All was not lost, however, as Nico Hoerner connected for a two-RBI double and then came home on a bloop single from Rafael Ortega as the Cubs were up big 5-0. One thing the Cubs have learned in this series is that no lead is safe in Toronto this time of year, and the Blue Jays began their comeback attempt in the third with Cavin Biggio unloading for a two-run shot to make things 5-2. Farrell was pulled following that homer as the Cubs wanted to keep this lead.

With the help of Rodriguez and Leiter Jr over the next three frames, the Cubs maintained that lead and saw Franmil Reyes extend that lead with another homer as the Cubs led 6-2 after five. That is when things got a little too close for comfort as Toronto started to rock Erich Uelmen in the sixth.

What started with a one-out double from Vladimir Guerrero Jr. using a Javy Baez bat was followed by a hit-by-pitch as the Blue Jays had a pair of runners on. The next pitch saw Alejandro Kirk get into a hanging breaking ball as he crushed one into the left field seats to pull Toronto within 6-5. This was a common theme for the Cubs all series long as they would hold a comfortable advantage only to see a late-game homer completely flip the script.

A Matt Chapman double and Teoscar Hernandez walk later in the inning still had the Blue Jays threatening, but Michael Rucker was able to get Biggio to ground out to keep things a one-run game. Knowing they would need a little more offense, Rivas set things up with a lead-off double to begin the seventh and then scored on the McKinstry single to extend the lead to 7-5. Not only was that the final run, but it was a deficit that Toronto would not be able to overcome.

With Brandon Hughes taking care of things in the eighth inning, David Ross went with Rowan Wick in the ninth, and that was a nervous time for fans. Despite his struggles for the better part of a month, Wick looked much better on Wednesday as he buckled down to secure the win and picked up his ninth save. Outside of Christopher Morel, everyone in the lineup had at least one hit, with McKinstry and Happ leading the way with two.