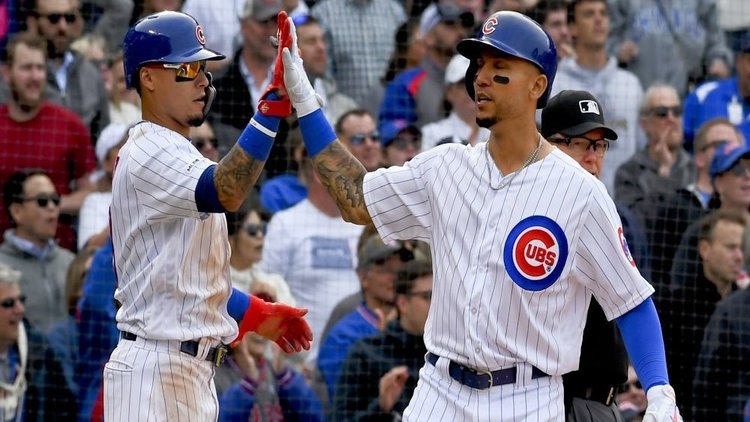 Fans were rolling over in their seats when the Cubs announced that they’d signed outfielder, Carlos Gonzales, to a minor league deal on June 1st, then their shock turned to awe just four days later, as the team announced the signing of renowned closer, Craig Kimbrel.

The deal on Gonzalez was a steal; he received the league minimum of $555,000.00, which was then adjusted to $355,096.00, accounting for just 0.17% of the Cubs’ payroll. There was no chance that Gonzalez would be in Iowa long, especially with a slumping offense who was looking for a little more veteran leadership. Inserting Gonzalez into a slot was easy, as the Cubs simply moved Jim Adduci back to Iowa. Considering both the tangibles and intangibles that CarGo has brought to the team in just five days, I’d submit that he’s already paid for himself.

Gonzalez’s presence seems to have a positive effect on his teammates, as Javy has suddenly started looking like Javy, and Schwarber has started smacking the hell out of pitches again. Jason Heyward is hitting, Willson Contreras is hitting, David Bote is killing it, and the Cubs’ pitchers love it.

Before CarGo’s arrival, the Cubs had languished with runners in scoring position for the better part of a month, batting just .162 with RISP from May 7th through the end of the last series in St. Louis. Through Gonzalez’s first three games as a Cub, the team has now gone 10 for 22 (.455) with RISP. Also, of note, the Cubs have belted out a total of 29 hits in the first three games with Gonzalez on the team, as opposed to a total of 23 hits over their previous three games, before CarGo’s arrival.

So, is there a downside to his signing? Unfortunately, I see a couple. The first doesn’t much bother me, as I was never a big fan of Ian Happ’s, but CarGo’s signing would seem to be the final nail in the coffin for any hope that Happ and his supporters had for seeing him return to Chicago. This shouldn’t come as a surprise, as Happ was first left behind out of spring training, then bypassed again when the team elected to call up Adduci. I wholeheartedly believe Happ will be gone soon, as Theo Epstein works and weaves his deals in the form of trades for additional relief pitching.

Next, Gonzalez’s signing has certainly created issues for Albert Almora Jr., as he’s not seen an inning of playing time in three days (other than as a pinch-hitter), which was much the same as when Happ was with the team. Almora’s bat has improved tremendously this season, and I’d credit that to his increased playing time, but Maddon believes in matchups, so with the steady stream of righties that the Cubs have been seeing, Almora is likely to sit quite a bit in the near future. The big question is who sits once the Cubs start facing left-handers. Schwarber’s been relatively hot, as has Heyward, but Gonzalez thrives at the plate when he’s the leadoff man, which would indicate to me that Schwarber will sit the most. Still, platooning Gonzalez with J-Hey and Schwarbs would ensure that they all stay rested.

Perhaps the most significant implication of this signing would be that the Cubs had taken their first definitive step in replacing Ben Zobrist. As the days without Zo in the clubhouse wear on, most media members, fans and, presumably, players are no longer fantasizing about a happy return, but rather, they are waiting and preparing themselves for the official announcement at this point. Theo Epstein’s remarks on Monday were almost haunting, as he said that “[Ben] would be in contact with his teammates sometime in the future.” While Zo doesn’t play center, signing Gonzalez provides not only a guy who can “replace” Zo (temporarily or not) in both right and left field, but he also provides additional coverage for center as well; not to mention the veteran leadership aspect.

The Cubs have sought that sort of leadership since David Ross retired, but they’ve (so far) been unsuccessful. Daniel Murphy’s signing was surrounded by controversy, and his tenure with the Cubs was short-lived. Daniel Descalso, by all accounts, is a natural leader, but his underperformances on the field and at the plate, have left the Cubs searching for more. Gonzalez has not been surrounded by controversy, he’s already a fan favorite, and he’s demonstrating the characteristics of being a leader after less than a week. Mission accomplished.

Craig Kimbrel’s signing and the issues (good and bad) that surround it is a little more complex than CarGo’s.

Kimbrel was, by far, the most sought after, free-agent closer available after the 2018 season, but with a brand-new World Series ring on his finger, coupled by Bryce Harper’s and Manny Machado’s demand for the big bucks, Kimbrel held out for what he believed was his share of the pie. Kimbrel’s 1.91 (9 years) career ERA and his 20.1 WAR had just about every team in both leagues salivating, and Kimbrel knew it. While he wasn’t demanding Harper or Machado money, he wasn’t selling out either, initially demanding multiple years (three minimum) at the cost of somewhere between $20M and $25M per year, and he made it clear from day one, that he was willing to sit out the season.

In what was the most boring free-agent season in MLB history, teams weren’t biting on Kimbrel’s demands, especially not the Cubs who haven’t historically spent a ton of money on closers. Brandon Morrow signed a two-year deal with the team for a total of $21M; which, to date, equates to 35 appearances, or about $400,000 per appearance. Although the Cubs initially feigned some interest in Kimbrel, they quickly fell out of the running, along with 29 other teams, in their bid to land the closer. Kimbrel eventually came down a little on his asking price about six weeks ago, as rumors around the media suggested that Kimbrel would consider $15M a year, but even at the lower price, he wasn’t accepting just a one year deal.

With their hands now tied, countless blown saves, no official closer in the bullpen, and compensatory draft picks no longer an issue; the Cubs started eyeing Kimbrel again, a week or so ago. Yesterday came the rumors from Ken Rosenthal that the Cubs were now making a hard push to sign him; three or so hours after that news broke, word of a deal had surfaced. The final numbers: 3 years, $10M this year, $16M for 2020 and 2021, and a guaranteed $1M buyout on a fourth-year option. Kimbrel will be a Cub for a while.

Out with the old, in with the new, as the saying goes, but just who will be boarding the next bus to Des Moines, once Kimbrel arrives, remains to be seen. Not many in the bullpen have minor league options left, in fact just two: Ryan and Carl Edwards Jr.

Kyle Ryan seemed like the no-brainer choice to be sent down, but there are a few snags involved in that theory. First, Ryan is one of only two lefties who’s currently in the Cubs’ pen (the other being Mike Montgomery), and Theo is not likely going to let Monty be the sole southpaw. Next, because Ryan has previously been outrighted to the minors, his remaining option comes with a stipulation that says he can immediately elect to choose free-agency if the Cubs decide to send him down. Perhaps the thing most in Ryan’s favor is that Joe Maddon trusts him (although why he continues to trust him so much seems questionable at times).

Edwards faced the humility of being optioned once already this year, but since returning to Chicago, his appearances and ERA continue to be sporadic. Currently, at 5.93, his ERA places him last among all Cubs pitchers and doesn’t bode well for an extended stay. Edwards cannot argue the demotion, as he has no recourse. The Cubs aren’t likely to trade him- at least not yet- but based on his age, the number of controllable years and his potential, he’d make enticing trade bait. If Edwards stays with the organization, he’s reemergence in Chicago would likely be contingent on other trades being made, which would re-open a roster spot for him.

Brandon Morrow isn’t going anywhere, that is if he ever heals. The Cubs have a ton invested in him, and he has zero trade value. The best-case scenario would be some a healthy return for the remainder of this year, at which time he’d be deployed first as a setup man, then inserted as needed as a backup to Kimbrel. If Strop, Morrow, and Kimbrel can combine for the 7th-9th innings, the Cubs will become very hard to beat, and lest you forget that Steve Cishek, Brandon Kintzler, and Tyler Chatwood will also fit into those late-inning equations.

I do believe that with the Kimbrel signing, the Cubs will attempt to move on from Brad Brach, as Brach has failed to turn in very many meaningful performances, especially as of late. Epstein stated yesterday, even on the verge of signing Kimbrel, that the Cubs would be diligently looking for ways (plural) to strengthen the pen and stated that those measures would come predominantly through trades. Craig Kimbrel is one man, albeit a good one, but he cannot possibly shoulder the weight of the Cubs’ lackluster bullpen on his own. Trust me; trades are coming.

I’d surmise that Kimbrel will pass his physical sometime today, then report to Iowa by no later than Sunday, for what will be a crash, mock-spring training assignment. Maddon has suggested that it will take him three weeks or so to be ready for deployment in Chicago, but my money is riding on Kimbrel’s first appearance being on June 24th, when the Cubs open up a series with the Braves at Wrigley Field.

I’ve avoided the elephant in the room until now, but it now must be addressed: The most significant implication of Kimbrel’s signing, is that it’s unofficially confirmed the end of Ben Zobrist’s career as a Cub. The Cubs couldn’t have possibly afforded Kimbrel without having a sudden windfall of cash, and since there haven’t been any cash deals for players, that money could only be coming from one source- the funds that had been earmarked for Zo.

I believe that it was far more than a coincidence, that Theo Epstein said in a press conference yesterday afternoon, that Zo would eventually be contacting his teammates, and then less than 4 hours later, signed Kimbrel. Also, somewhat ominously foreboding was Epstein’s comment: “[Ben Zobrist] doesn’t owe us anything.” While the intent of that quote was about people wanting to hear from Zo, it also seems to have subtle undertones that say, “He served us well, and he’ll leave the club with no strings attached- he owes us nothing.”

Kimbrel and CarGo will do wonders for the team (Gonzalez already has), and Ben will be sorely missed. Zo undoubtedly understands that the team can’t wait forever for his return, and the Cubs undoubtedly understand that Zo’s family and emotional health must always come first. I’d expect Zo to announce his retirement sometime soon. For now, though, it’s on with the show.