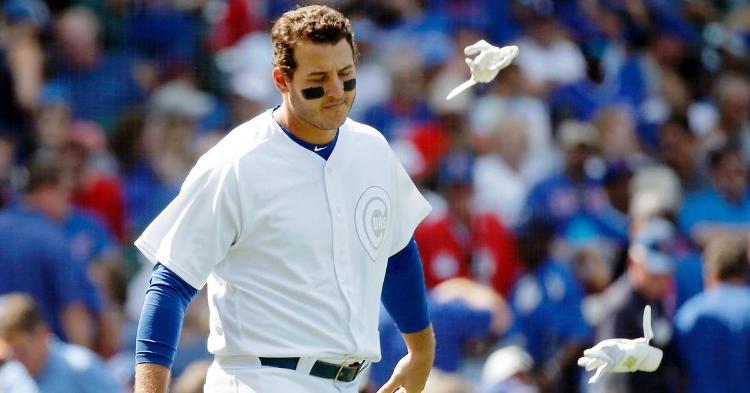 Rizzo and Co. won only one title during their title window (Jon Durr - USA Today Sports)

When Theo Epstein and Jed Hoyer initially tore down the Cubs in 2012, the goals were simple:

While the biggest goal — winning the World Series — was achieved, the other two have not quite been delivered.

The Cubs have failed to draft and develop starting pitching, with their only pitching successes in player development being players acquired via trade. While the jury is still out on players like Albert Alzolay, Brailyn Marquez, and Burl Calloway, pitchers like Brian Duensing do not quite add up to be player development machine on the pitching side. On the side of hitters, Albert Almora is largely considered a bust of a draft pick. Kyle Schwarber had his ups and downs but is no longer on the team as he was non-tendered by the Cubs and signed by the Nationals.

Of course, Kris Bryant was a home run of a pick — but it’s hard to miss when you are drafting number two (unless you’re the Chicago Bears). Ian Happ and Nico Hoerner are among those that seem like good picks, but only time can tell how successful they are. Ed Howard was the last first-rounder of the era, who likely won’t see the MLB for a while.

David Bote is one of the rare occurrences of a player taken late in the draft who has impacted the major league level in Chicago. Javier Baez and Willson Contreras have always been in the Cubs organization, but the Jim Hendry regime drafted Baez and signed Contreras.

The point is, most of the Cubs' active roster over the last few years has been either acquired through trade or signed via free agency. While the Cubs did win the World Series in 2016, the lack of player development led to the Cubs having to trade their remaining prospects and spend heavy amounts in free agency to fill holes that could've been filled through better player development.

For example, when the Dodgers were bringing up a Walker Buehler or the Indians a Shane Bieber — the Cubs were trading Eloy Jimenez and Dylan Cease for Jose Quintana, and spending over $20 million a year on Cole Hamels, or trading Jorge Soler for a year of Wade Davis or freeing up money to sign Craig Kimbrel. What makes that pill even harder to swallow is seeing Soler lead the American League in home runs or watching Jimenez tear it up on the South Side of Chicago.

The Cubs charge record numbers for tickets and concessions and have one of the league’s most marketable and well-liked brands — so Tom Rickets and the Rickets family who own the Cubs were never particularly tight on money — nor did they have problems dishing money for Epstein and Hoyer to spend.

But quickly, that trend continued to the extent that the Cubs were near the top of the league in payroll and still had numerous holes to fill — leading to the Ricketts having to spend more and more money. Soon the Cubs became repeat offenders for violating the league’s luxury tax cap and were penalized for it.

The Ricketts were understandably hesitant to continue to give money to the front office to spend when a lot of the moves were costly and frankly ineffective. This then forced the front office into making trades to clearing payroll and focusing on the future, like the Yu Darvish deal.

What makes it hard to swallow as fans is that this type of retooling or rebuild would not be in the cards if the Cubs had been more effective in the two aspects of the original rebuild — building sustained success and creating a player development machine.

While any Cubs fan would easily accept five playoff appearances in six years — no-one can say that the Cubs did not leave a championship or two on the table during the Epstein era.

But what really makes this period of transition so difficult is the fact that instead of spending copious amounts of money on upgrading the onfield product, the Rickets family:

* Forced the front office into a rebuild/retool

* Spent on resources to renovate the stadium and neighborhood

* Funded the building of bars, hotels, and offices near Wrigley Field

So the Ricketts have spent millions across various business ventures, future investments, and political campaigns amidst a pandemic — but can’t scour up the money to sign Kyle Schwarber.

That’s what is most frustrating for Cubs fans. Seeing a big-market team make big-market investments off the field but act like a small-market team on the field — especially after promising sustained success.