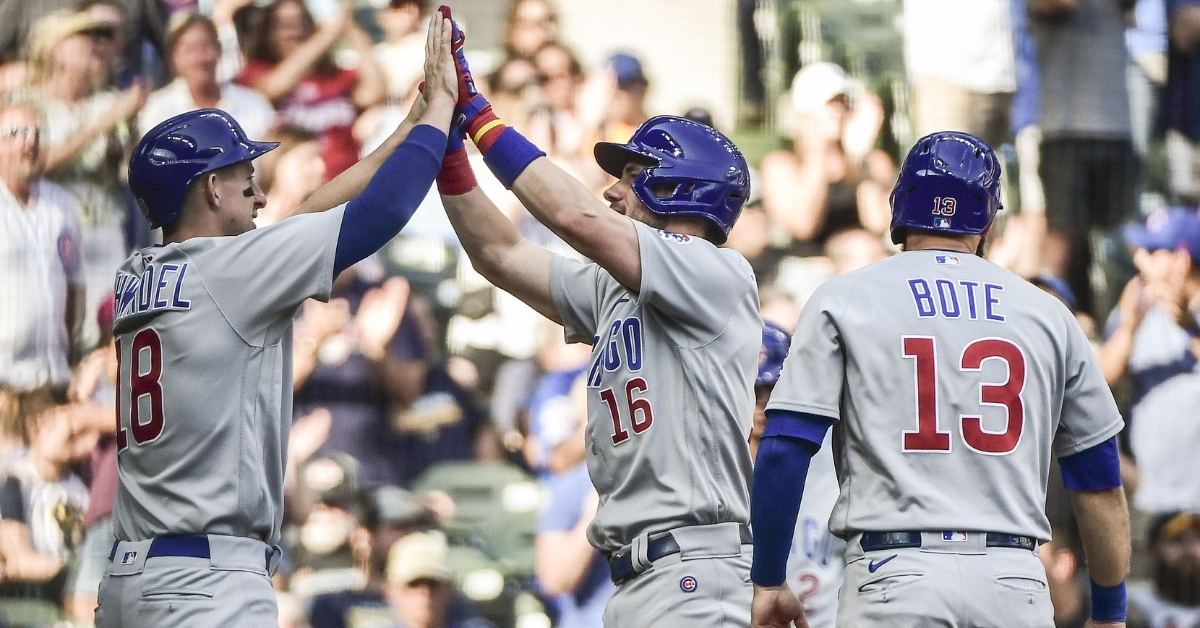 MILWAUKEE – In front of a packed American Family Insurance Field in Milwaukee, the Chicago Cubs (67-83) took on the Milwaukee Brewers (91-58) for the final time in the 2021 season. In what has been a season-long nightmare with the Cubs losing 11 straight against Milwaukee dating back to late April, any victory over them at this point would be a confidence booster to take into the offseason.

With Eric Lauer on the mound for Milwaukee facing off against Keegan Thompson, who returned from the IL, the Cubs used some late-game magic to touch up one of the best bullpens in all of baseball. In the process, the Cubs went extra-base crazy while watching Patrick Wisdom unload for his franchise-record 27th homer by a rookie as the Cubs took down the Brewers 6-4.

Great day for a Dub ?? pic.twitter.com/b6tTJzcHGk

It is hard to believe the Cubs went all season without seeing Lauer on the hill, but that was the case as he missed the first few series before the same three starters seemed to be lined up for the rest of the second half. Lauer was outstanding, not only through four innings but his entire start as he went 5 1/3 innings allowing just one run on one hit to go with six punchouts. His ERA fell to 3.03 on the season, giving the Brewers another starter under 3.5

In his first start since coming off the IL, Keegan Thompson was a bit rusty, walking two and throwing 40 pitches in two innings. He gave way to Adrian Sampson, who continues to pitch well for the Cubs, giving them four innings out of the pen and allowing two runs in the process to lower his ERA to 2.84. After four scoreless frames across the board, Lauer finally gave up his first hit, which led to the game's first run as Trayce Thompson connected for his first homer of the season, putting the Cubs up 1-0. Thompson is no stranger to home runs this season, leading the Cubs AAA affiliate with 21 long balls this season.

Later in that inning, the bottom half, to be exact, and it was the Brewers bats that started to come to life after they too were held in check through four innings. After Jackie Bradley Jr led off the inning with a walk, Kolton Wong and Eduardo Escobar delivered consecutive one-out RBI doubles as the Brewers were now in front 2-1. Given the way this series has gone this season, that seemed to be the end for the Cubs until the eighth inning when they started to put the pressure on in a big way.

With Brad Boxberger getting called upon for a second straight night to face Willson Contreras, the catcher worked a pinch-hit walk putting the tying run on first base. One batter later, Matt Duffy put one into left field for an RBI double, bringing Contreras home to tie things up 2-2. Not to be outdone, Frank Schwindel continued to drive in runs as his RBI double gave the Cubs the lead for good 3-2. Schwindel has made Cubs fans forget about Anthony Rizzo's offense in just two months, as his numbers have been better across the board.

David Bote extended the inning with another walk putting two runners on with still no outs, and that is when Wisdom made history connecting for his team-record 27th homer by a rookie to make things 6-2. The Brewers were able to get the next three hitters out, but the damage was already done in a big way.

The Cubs had another golden opportunity to breakthrough in the ninth inning, loading the bases with two outs only to see Wisdom watch strike three go by to end the threat. Looking to close out Brewers after a horrendous eighth inning Friday night, Rowan Wick took the ball and immediately ran into trouble again.

After striking out Bradley Jr to start the inning, Wick put himself in a jam by walking two hitters but was on the verge of getting out of the inning without allowing a run. That was until Christian Yelich drove a single the opposite way scoring a pair to pull the Brewers within 6-4. With another single by Omar Narvaez, the Brewers had the winning run at the plate in Luis Urias, who walked to load the bases. Fortunately, Michael Rucker was able to finish the jam Wick started getting Jace Peterson to fly out and end the game

No player has gone through a more frustrating 2021 season than Nico Hoerner. After failing to make the team out of camp, Hoerner was sent to the minors only to be called up in late April. Since his arrival, all the kid has done is hit, posting an average north of .300 much of the season.

His biggest knock against him since becoming a pro has been his durability, as that has been an issue yet again. With under 120 games of Minor League experience under his belt, Hoerner dealt with a hamstring injury and an oblique injury this year, limiting him to under 60 games. Combine that with a shortened season last year and a brief stint in 2019, and he is looking at less than 120 games of MLB experience.

He was finally back with the team Sunday after spending the last week in the minors, and although he went hitless, he is still hitting .304. With Nick Madrigal in the fold to play second next season, Hoerner will be counted on to play SS every day. This is his time to prove to the Cubs he can handle that role next season.

Thompson is rusty, but solid

Much like Hoerner on offense, Thompson too returned from the IL after missing the last three weeks with shoulder fatigue. Instead of sending him to AAA for one or two rehab starts to finish the season, the Cubs immediately put Thompson right back in the rotation and will most likely treat his last few outings as rehab outings to use for 2021.

Thompson was rusty as his command wasn't as sharp as the Cubs hoped. That forced him to throw a lot of pitches as his outing lasted just two innings. The biggest key was finishing his outing with no runs allowed, which has been an issue for him over his last few starts. The velocity was back up in the 94-96 range, and that cutter seemed to have a sharp bite. The next step is to command some of those pitches, as is looking for a strong finish to 2021.

While most players on the Cubs roster have started to hit their way out of a season-long slump, Bote is not one of them as his average has fallen to .190 after a hitless Sunday. The team leader in RBIs in 2020, Bote has never been a high average hitter in the MLB, but has found a knack for barreling up baseballs and coming through in the clutch.

While he has had plenty of hard contact this season, the results haven't been there as he has been hitting it right at people. That seems to have taken a toll on him, and his overall play is severely suffering. If it weren't for his strong defense, especially at third earlier in the season, Bote would be nothing more than a role or platoon player at this point.

Next season that may well be the case with Madrigal at second, Hoerner at short, and potentially Wisdom at third. As important as Bote has been for the Cubs over the last few years, he is everything that was wrong with this team as there is too much swing and miss in his game. The everyday experiment for Bote might be coming to end soon, and the Cubs need to plan for him being a role player at best next season to maximize his abilities.