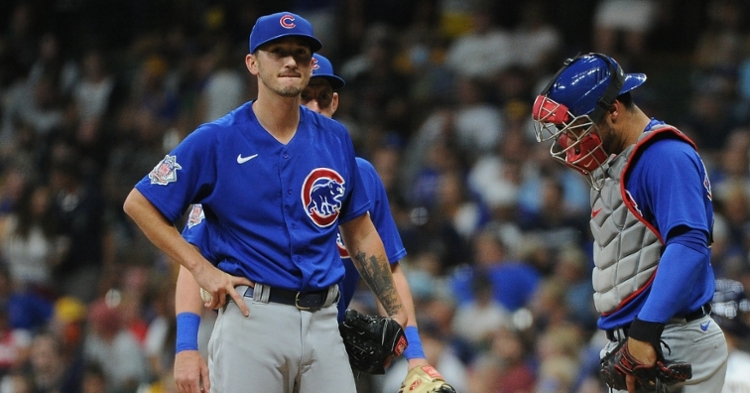 MILWAUKEE – Leave it to the Chicago Cubs (66-82) and their fans to sell out American Family Field in Milwaukee no matter what their record is. Given the title Wrigley North for a reason, the Cubs faithful packed the stands on Friday as they looked to make the Milwaukee Brewers (90-57) wait just a little bit longer to celebrate a division title.

With former Brewer Zach Davies on the hill, the right-hander was trying for his seventh win of the season and first in what seems like forever, early July to be exact. Opposing him was hard-throwing Adrian Houser, who has put his best season as a pro together this year, and that is a good thing for the Brewers, but not so much a good thing for the rest of the league.

As the Cubs have done lately, their offense had no trouble scoring as they were able to get to Houser early and often chasing him after four innings of work and four earned runs allowed. Unfortunately, Davies wasn't much better as he continues to struggle to get through five innings lifted after allowing three runs in 4 1/3, but the Cubs still lead most of the game. In fact, they led until the bottom of the eighth inning when Rowan Wick picked the worst time to have his worst outing of the season as the Brewers came from behind to win 8-5 moving their magic number to four.

For the most part, the beginning stages of the game were quiet as neither team got anything going across three outside a couple of sporadic hits. Once the fourth inning arrived, both offenses came to life, and that is when the game got rolling. After Ian Happ walked to lead things off, Patrick Wisdom singled to right with one out ahead of the Alfonso Rivas single that gave the Cubs a 1-0 lead.

Matt Duffy doubled that lead with an RBI fielder's choice, reaching first base on the play only to see Sergio Alcantara keep the line moving with an RBI single himself, extending the Cubs lead to 3-0. Duffy came around to score later in that inning on the Houser wild pitch as the Cubs were off and running 4-0.

As fans have seen for the better part of the last few days and much of the second half, no lead is safe when it comes to Cubs pitching, and Davies showed precisely why. His lack of command and inability to get through a lineup three times has made life difficult for David Ross and the bullpen, and the Brewers capitalized on that during their half of the fourth.

What started with a Kolton Wong double and Eduardo Escobar single to put a pair of runners on base saw Christian Yelich bring home the Brewers first run of the game as his single made things 4-1. With the bases now loaded following the Omar Narvaez walk, Luis Urias cashed in with a clutch RBI single, pulling the Brewers within 4-3. Davies was able to recover and keep the Brewers there, but it was still an excellent inning for their offense.

Knowing they needed more offense to win this game, the Cubs turned to the hottest hitter in baseball in Frank Schwindel as his incredible run continues with another homer to make things 5-3. With two more hits, Schwindel is hitting .343, and the fantastic story continues. Faced with another bases-loaded situation in the bottom of the fifth, Codi Heuer replaced Davies on the mound and was able to get out of that jam with a pair of strikeouts, keeping the Cubs in front.

Things looked good for the Cubs over the next few innings until Wick was called upon to pitch the eight. Still leading 5-3 at that point, Wick struck out two of the first three hitters he faced before things came unraveled in a hurry. A walk to Daniel Vogelbach followed by a Lorenzo Cain single had the Brewers threatening as they were within 5-4. With the score now tied 5-5, Wong delivered a huge base hit that gave the Brewers the lead as the crowd went into a frenzy with the Brewers leading 7-5. They would add another run on the Dillon Maples wild pitch before finishing off the Cubs in the ninth for the win.

With the loss, the Cubs have officially guaranteed themselves a losing season which hasn't been done in a long time. You have to go back to 2014 for this organization's last losing season, a year in which they went 71-91 in the process.

While there are many similarities between that team and this team, one thing that stands out was that season saw the Cubs call up plenty of prospects who were ready to play now compared to this season, where they are just piecing together a roster. It is hard to stay on top as long as the Cubs did, and now they must figure out what to do next to get back on top sooner rather than later.

The Cubs have found their first baseman for 2022

Although he may not be the flashiest of players with guys like Freddie Freeman and Anthony Rizzo hitting the market this winter, but Schwindel has done everything he needs to do to earn the starting 1B job next season. Sure, he may be 29 years old and a bit older in terms of rookie status, but much like Wisdom, this season was his first real opportunity to play, and he has shown the Cubs what he can do.

Not only has he played good defense at first, but he has brought with him good power as he would be on pace for 34 homers had he played an entire season this year. Add in his high OPS, OBP, and .343 average, and he has done everything you need to see, even if it is a limited sample size. With the Cubs most likely not going to be a contending team next season, why not get the most out of Schwindel now before you build your next title roster.

Frank Schwindel gets his daily jog in. pic.twitter.com/Xctq6PW6vF

When will this nightmare end?

The Brewers have had the Cubs' number since late in the 2018 season, but nothing has been like this. With their win on Friday, the Brewers have improved to 14-3 against the Cubs this season and have won 10 consecutive games against them for the first time ever.

One more win this weekend will tie them for the most wins in a season series all-time in this rivalry with a chance at setting a new bar this weekend. The Brewers are the class of the Central Division this season and a team the Cubs would love to imitate going forward, especially when it comes to pitching. They are a legitimate World Series contending team and have shown it all season.