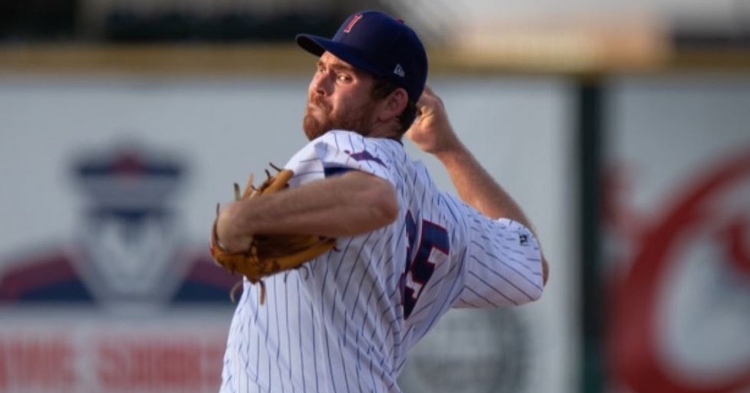 Biagini get the victory on Tuesday (Photo via Iowa Cubs)

Tuesday marked the start of another minor league of action for full season leagues while Rookie ball pressed on after getting a late start to their season. For the Cubs, Tuesday couldn't have gone much better as they put on an impressive showing across the board to 5-2 on the evening.

Strong pitching and timely hitting was the name of the game for Iowa as they topped the Indians 5-1. Joe Biagini got the start, and despite battling through plenty of command issues, he managed to go 5 1/3 innings allowing just three hits to pick up the win. The trio of Rowan Wick, Dakota Mekkes, and Ben Leeper followed suit to preserve the win as Leeper continues to impress with his 1.31 ERA.

Sometimes all it takes is one inning, and the Cubs needed just one inning to take the lead and win. With the game tied 0-0 in the bottom of the third, Abiatal Avelino connected for a game-winning RBI double as he put the Cubs in front 2-0. Alfonso Rivas added to that lead a short while later with an RBI groundout as Iowa led 3-0.

Fast forward to the seventh, and the Indians finally got on the board with Bligh Madris picking up an RBI double off Mekkes to make things 3-1.

Fortunately for the Cubs, they had a bit more offense left in the tank, with Greg Deichmann picking up his first RBI hit with Iowa before a bases-loaded walk to Rivas gave Iowa a 5-1 win.

The Cubs had 10 hits in the game, with Nick Martini leading the way with three. Deichmann, Edwin Figuera, and Biagini added multi-hit games of their own, with Avelino picking up the other hit in the victory.

Got the series started right! pic.twitter.com/Ji1tkPVmJ2

The Biscuits used two innings of crooked numbers to top the Smokies as Tennessee fell 6-2. The long season continued for Cam Sanders despite going six innings in his start. He allowed just four hits, but served up five runs in an overall long evening on the mound.

Early on, things went well as Sanders held the Biscuits in check through three innings. In the fourth, Niko Hulsizer picked up an RBI double to give Montgomery the lead before Austin Shenton added to that with a sacrifice fly to make things 2-0. Looking to generate some offense of their own in the sixth, Jared Young came through with an RBI double as the Smokies were within one.

That would be as close as things would get with Shenton picking up an RBI double to extend the lead to 3-1 ahead of a Ruben Cardenas homer that gave Montgomery a 5-1 lead. Down 6-1 in the eighth, Zach Davis played long ball for the second time, but it wasn't enough as the Smokies dropped game one. Chase Strumpf and Young had strong showings at the plate as they led the offense with two hits. Davis, Nelson Maldonado, and Carlos Sepulveda recorded the rest of the hits.

One the strength of one big inning, the Cubs offense did just enough as they were able to hold off Peoria 5-4. Ryan Jensen got the start and surrendered just one run in 3 2/3 innings despite tons of command issues. He gave way to Jose Albertos, who looked incredible out of the pen, striking out four in 3 1/3 innings of relief work.

Peoria was able to grab an early 1-0 lead in the third when Leandro Cedeno connected for an RBI single off Jensen. That was all the offense they could muster across the game's first six innings as the Cubs offense started to take center stage. Following a Harrison Wenson double play tied the game 1-1, South Bend used a two-out barrage to seize control of the game.

That rally started with a D.J. Artis homer followed by a Bryce Ball single, and just like that, South Bend was on top 5-1. Despite that being all the offense South Bend would get, they were able to hold off the Chiefs as Peoria scored three runs across the game's final four innings before coming up short.

With seven hits, there was plenty of hits to go around, but it was Jake Slaughter leading the team with two. Artis, Josue Huma, Ball, Ryan Reynolds, and Alexander Canario picked up the remaining hits while Nelson Velazquez went hitless.

Jose Gonzalez set the tone for the Pelicans on Tuesday, twirling five innings of one-hit ball. From there, the offense gave him some early support before coming through in a big way lately.

Myrtle Beach made history on Tuesday night as fans were treated to a rare feat that is rarely seen. Not only did Fabian Pertuz pick up an inside-the-park homer in the second to give the Pelicans a 2-0 lead, but it was one of two inside the parkers. That score held until the sixth inning when the Tyler Tolbert triple put Columbia on the board ahead of the Herard Gonzalez sacrifice fly to tie it.

Not only is one inside the park homer rare, but why not make it two, which is precisely what Jonathan Sierra did in the fourth. His inside the parker was a piece of history as he not only brought home more than himself, but three other people as Sierra came through with an inside the park grand slam to make things 6-2.

Burle Dixon and Kale Emshoff picked up a pair of solo homers the next two innings to pull closer, but the Pelicans were able to hold on for the 6-4 win. Sierra was not only responsible for four RBIs, but for two hits to lead the offense. Kevin Made joined him while Yohendrick Pinango, Jordan Nwogu, Ed Howard, and Pertuz picked up the remaining hits.

We scored all of our runs on inside-the-park homers. That’s pretty cool.#MBPelicans pic.twitter.com/zsShZLpL7V

One day after putting up 16 runs, the Cubs offense had a much tougher time getting things rolling, falling to the Royals. Luis Devers may have taken the loss after surrendering five runs in five innings, but only three of those runs were earned as his ERA sits at 2.73 for the year.

Rothaikeg Seijas homered off Devers in the second to give the Royals an early 2-0 lead before the Wilmin Candelario double pushed the lead to 3-0 in the third. That lead eventually grew to 5-0 in the fourth as the Cubs were off to a rough start. That was until the Rafael Morel sacrifice fly had the Cubs on the board and had momentum swinging.

One inning later saw Ismael Mena add a sacrifice fly of his own ahead of the Andy Weber single and Owen Caissie triple, and just like that, the Cubs were within 5-4. The Cubs wouldn't get any closer as the Royals tacked on another later run to pick up a 6-4 win.

There haven't been too many instances where both DSL teams won on the same day, but Tuesday saw that happen. Starting with DSL Red, the Cubs used a late-game rally to erase a multi-run deficit and move back to .500 on the season. A big reason for that was the performance of Anthony Martinez out of the pen as he allowed just one hit in four shutout innings of work.

The Cubs offense got off to a slow start as the Rangers used a first-inning wild pitch to grab the lead before the Francisco Laya single and Frandy Almonte double had the Cubs in a 3-0 hole. Pedro Ramirez took it upon himself to keep things close in the third as his RBI triple had the Cubs within 3-

2. The Rangers responded to that triple with an Edgar Basabe single and a sacrifice fly to once again lead by three 5-2.

Hoping for some late-game magic, the Cubs turned to the eighth inning to make things interesting, with Ramirez doubling home his third RBI of the game. An Anderson Suriel double followed his double, and just like that, things were knotted up 5-5. The Cubs continued their comeback bid in the ninth inning as a wild pitch not only gave them a 6-5 lead, but proved to be the deciding run in the process.

Ramirez keeps chugging along offensively, as he picked up three hits to go with his three RBIs and is now hitting .383 on the season. Cristian More, Suriel, Andrews Cruz, and Jose Herrera tallied the remaining hits in the win.

Of all the Rookie League games in action for the Cubs, this was the one game reliant on pitching as the Cubs picked up their fourth win in walk-off fashion. Once again, it was a relief effort on the mound that stood out Samuel Rodriguez, tossing 5 1/3 innings of work. His performance allowed things to remain close to give the Cubs offense a chance to make things happen.

With both teams held scoreless through three innings of play, a bases-loaded walk to Glider Figueroa put the Rangers in front 1-0 before a passed ball in the sixth extended that lead to 2-0. Fortunately, that would be all the offense the Rangers would get as Rodriguez entered at that point to shut them down.

Looking for some late-game magic, Lizardo Ruiz and Ezequiel Alvarez provided that as the Lizardo double put an end to the shutout bid before the Alvarez single tied things up and forced extras. In the extra frame, the Rangers went away quietly while the Cubs were able to walk things off using a Frank Hernandez sacrifice fly to pick up the win.

Alvarez has started to heat up his past few games, picking up a pair of hits from the leadoff role to lead the way. Frank Hernandez added a hit to go with his RBI, with Josh Rojas and Ruiz picking up the remainder of the hits. Cristian Hernandez suffered a hitless day and is hitting just a .232 on the season.