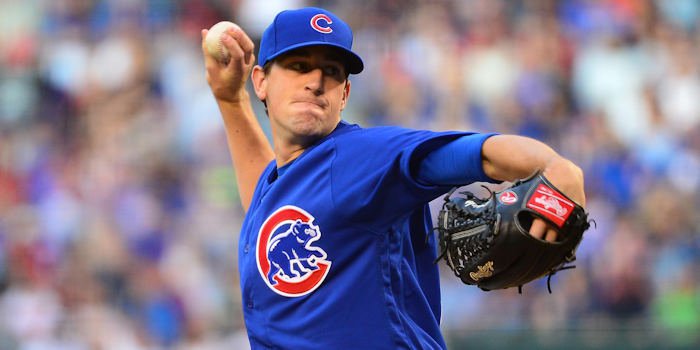 Although Kyle Hendricks pitched fairly well on Sunday, he received little run support, as the Cubs struggled at the dish.

CHICAGO -- Even with Cy Young candidate Kyle Hendricks on the mound, the Chicago Cubs (94-55) were unable to beat the lowly Milwaukee Brewers (68-82) on Sunday afternoon. Falling 3-1, the Cubs’ batters were miserable with runners in scoring position, and, despite a solid outing from Hendricks, the ace was unable to avoid earning a loss, his first in his last five starts.

Although the Cubs amassed nine hits on the day, they were only able to score one run, mostly because of a lack of plate production when it mattered most. Leaving a woeful six runners in scoring position stranded, Chicago wasted a nine-strikeout effort from Hendricks, who is now 15-8 on the year.

The top of the second served as Hendricks’s downfall, with both of the runs that he gave up coming in that half inning. Brewers third baseman Hernan Perez, who may or may not have been a conquistador in a past life, proved to be the conqueror of the Cubs today, sparking the Brewers’ crucial second inning. He hit a bloop single to left to start the inning and proceeded to collect his 31st steal of the season. After Perez advanced to third on a groundout, Milwaukee catcher Martin Maldonado drove him home on a hit to center, Maldonado's 19th RBI. Hendricks then gave up two more singles, the second of which, by pitcher Wily Peralta, scored Maldonado from second and put the Brewers up 2-0. Peralta was effective both at the plate and on the mound this afternoon, earning the win for his pitching performance to improve his record to 7-10.

In the bottom of the third, the Cubs had a golden opportunity to cut into their early deficit, but they failed to do so. Hendricks took matters into his own hands, garnering a lead-off single. Soon after, the Cubs found themselves in a favorable bases-loaded, one-out situation. However, the ball did not leave the infield for the remainder of the inning, as left fielder Ben Zobrist struck out for the second out, and shortstop Addison Russell popped out to first for the third out.

Pinch hitter Tommy La Stella pulled the Cubs to within one in the bottom of the sixth by hitting a clutch two-out double to center that scored second baseman Javier Baez, who was 1-3 on the day. But the Cubs went scoreless for the rest of the matchup and suffered a disappointing defeat.

With Cubs reliever Trevor Cahill on the bump, Brewers first baseman Chris Carter, who was a constant thorn in the Cubs’ side this series, hit a solo home run to left in the top of the eighth. Carter's 36th long ball of the year, the jack over the left field wall gave Milwaukee a 3-1 lead that it would not relinquish.

The Cubs had one final opportunity in the bottom of the ninth, when trailing 3-1 with runners on first and second. True to the theme of the game, though, Chicago faltered when presented with this potential scoring opportunity. The Cubs’ top two sluggers, third baseman Kris Bryant and first baseman Anthony Rizzo, struck out swinging, respectively, in consecutive at-bats to end the game. As a result, the Brewers came away with an impressive 3-1 road victory, and Milwaukee closer Tyler Thornburg accrued his 11th save of the season. The Cubs struck out nine times on Sunday and never developed any type of offensive rhythm.

The Brewers took three out of four from the Cubs in this series at Wrigley Field, putting a damper on Chicago’s National League Central title that was earned during the course of the series. The Cubs will look to rebound with a three-game series at home against the last-place Cincinnati Reds (63-86) in the coming days.

His flag flies high at Wrigley Field for good reason.