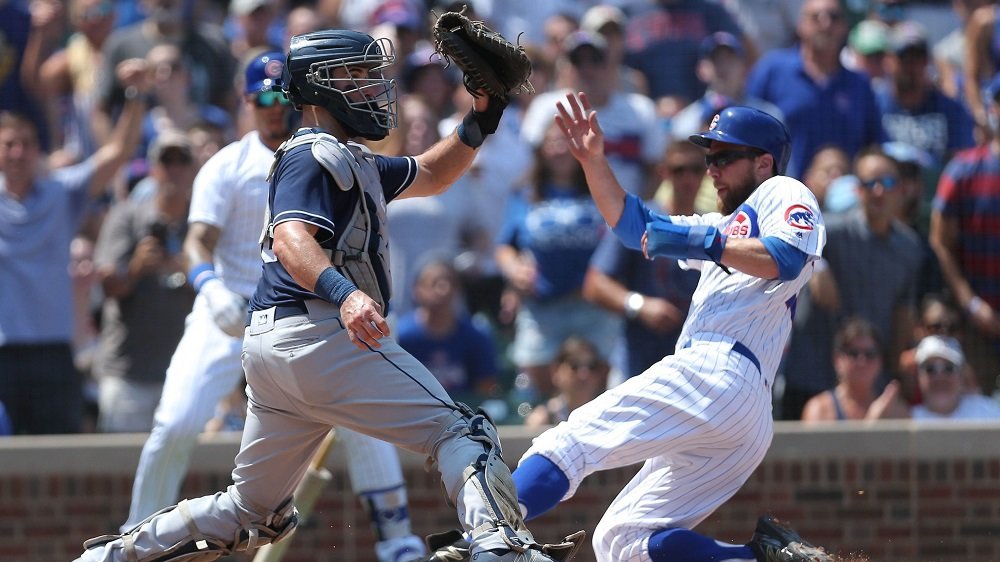 Ben Zobrist scored what proved to be the winning run with a great slide in the second inning. (Photo Credit: Dennis Wierzbicki-USA TODAY Sports)

CHICAGO — For the second day in a row, the Chicago Cubs (64-46) eked out a win over the San Diego Padres (43-70) by a final score of 5-4 at the Friendly Confines. Furthermore, Cubs reliever Pedro Strop picked up the save for the second straight game, but, this time around, he endured a more more relaxing ninth inning and celebrated with a far more subdued fist pump.

Riding a five-run second inning to victory, the Cubs manufactured most of their offense early on and utilized a solid bullpen performance to hold off the Padres and accrue their second win thus far in the four-game series. Getting to Padres starting pitcher Walker Lockett in a lucrative second frame, the Cubs produced a pivotal two-out rally.

Prior to the rally, however, Cubs left fielder Kyle Schwarber, who went 2-3 with the bat, started the bottom half of the second with a solo bomb to right-center for his 20th home run of the season. Center fielder Ian Happ followed that with a base knock, and, three at-bats later, he scored on a single hit up the middle by shortstop Addison Russell. Russell's base hit was the first of four consecutive two-out hits for the Cubs.

Homering for the fifth time in nine games, first baseman Anthony Rizzo put the Cubs up 4-0 by plating Russell with a 444-foot home run to straightaway center field. The dinger, which was Rizzo's 17th of the year and 182nd in a Cubs uniform, moved Rizzo past Alfonso Soriano for sole possession of 11th place on the Cubs' all-time home-run list. Rizzo went 2-5 at the dish on the afternoon.

.@ARizzo44 is hitting .667 since he wasn't named NL Pitcher of the Month for July. #TeamRizzo pic.twitter.com/wuLPIIqA2u

Veteran Chicago slugger Ben Zobrist then garnered a two-out double to deep center, and he scored on an ensuing single to right by right fielder Jason Heyward. Sliding in just under the tag at home plate, Zobrist provided the Cubs with a five-run edge. Heyward led all batters by tallying three hits in the contest.

From there, the Cubs did their best to stave off the surging Padres, who scored three runs in the top of the fourth to provide themselves with new life. Cubs right-hander Kyle Hendricks, who struck out seven in 5.2 innings of work, collected his second straight winning decision to improve to 8-9 overall, but he struggled at times. Giving up four runs on five hits, Hendricks was taken to task in the fourth frame.

Following a leadoff single in the top half of the fourth inning, Padres center fielder Manuel Margot gave his club its first run with a ground-rule double that carried into the ivy in deep right-center. A few plate appearances after that, Margot came home to score on a sacrifice fly. Catcher Austin Hedges then made the score 5-3 with a solo jack to left for his second home run of the series.

No beating around the bush: Hedges is ?? right now.#LetsGoPadres pic.twitter.com/CrdhP5lv4h

In the top of the sixth, Padres first baseman Eric Hosmer singled with one out, and right fielder Hunter Renfroe cranked a double to left soon afterward. Hedges next tallied his second RBI of the game with a sacrifice fly that ushered Hosmer home and resulted in Hendricks being taken out of the game. The Padres were ineffective in the hitting department after that, though, as they went 10 up, 10 down the rest of the way.

Cubs middle relievers Steve Cishek and Brandon Kintzler each received holds for their efforts. Cishek struck out three in just 1.1 innings of work. Later, in the ninth, Strop finished off the 5-4 win and picked up his seventh save. On Friday, Strop gave up two runs in the ninth and was lucky to avoid giving up the lead entirely, but he was far more dominant on Saturday, collecting three straight outs and accentuating the game-ending strikeout with a mild air punch.

The Cubs, who amassed all five of their runs and six of their 11 hits in the second inning alone, were fortunate to escape with a win after stranding 20 runners. In the bottom off the seventh, the Cubs were granted a golden opportunity to gain some breathing room when they loaded the bases with no outs, but they failed to get the ball out of the infield after that and left all three runners stranded.

Nevertheless, the Cubs improved to 6-4 in their last 10 games by way of the 5-4 triumph. Lockett, who suffered through one bad inning, fell to 0-2 with the loss in his second big-league start. He pitched five innings, in which he gave up nine hits and two walks and struck out six. Chicago will have the opportunity to take the series from San Diego in tomorrow afternoon's finale.