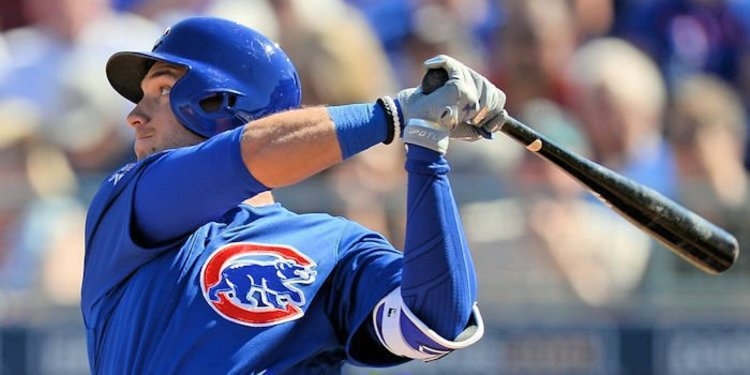 Almora Jr. was 3-3 with a homer and 4 RBIs (Charles LeClaire - USA Today Sports)

The Cubs entered Cactus League play on Tuesday with a 1-1 record. Prospect Adbert Alzolay (RHP) earned the start, hoping to rebound from some rocky major league appearances last year. David Ross managed to squeeze in another couple of handfuls of Cubs’ hopefuls, as he continued to work on getting everyone playing time.

LHP Marco Gonzales got the start for Seattle.

Complicating the issue of formulating a lineup and future roster, Rossy’s out for the third straight game with the flu. Jose Quintana is still out with the bug, and now Anthony Rizzo is parading around the clubhouse with a surgical mask, hoping to avoid getting sick. For the third day in a row, Andy Green assumed the managerial duties.

The Cubs got busy early.

T-1 Bryant worked a walk, coming back from an 0-2 count, then scooted to second on Rizzo’s groundout. Javy drew a walk after being down in the count. Souza’s single to right-center scored Bryant, then Almora ripped a single to the left, scoring Javy. After Bote fanned, Phegley took Gonzales deep to center, putting the Cubs up 5-0. That would end Gonzales’ day. Cubs up 5-0.

B-1 Alzolay would also get rocked early, giving up a double and single to the first two men he faced (run scored). Alzolay settled down momentarily, getting his first K of the season, but then walked the next man. He fanned former Cub Carlos Gonzalez, then gave up another single (run scored). Alzolay would get his third K of the afternoon, ending the damage. Cubs lead 5-2. This was a 43-minute first inning.

T-2 Ian Miller got beaned, then stole second. KB would fly out(right), but then Rizz walked. Baez fanned for the second out. Miller broke for third, the pitcher stepped off and fired for the out, but an errant throw allowed Miller to score. Souza doubled, scoring Rizzo, then Almora singled, scoring Souza. Bote would fly out to end the frame. Cubs up 8-2

B-2 Righty Dan Winkler got the call for this frame and looked rather impressive, retiring the side in order on a pair of strikeouts and a groundout to Rizzo.

T-3 Phegley would smack a double to center to start the frame, but the next three (Garcia, Miller, and Bryant) would go down in order (K, FO-8, GO-6).

B-3 RHP Ryan Tepera struggled as he hurled the third. A single, walk, infield grounder and a passed ball (Phegley) would net the Mariners another one, then Lopes doubled, bringing Seattle to within four. Cubs lead 8-4.

T-4 Rizz fanned to start the frame, then Baez singled (replaced by Corban Joseph). After Souza fanned, Almora blasted a homer, putting the Cubs up 10-4. Bote singled and was replaced by pinch-runner Zack Short, who then got picked off to end the frame.

First home run of the spring for Albert ? pic.twitter.com/GiFUykUjSl

The fourth #Cubs catcher to homer this Spring is PJ Higgins! @pjhiggins7 (Via @CubbieBlue2016) pic.twitter.com/ImLzver8fc

B-7 Brock Stewart gave up a leadoff double but fanned two before giving up a run on an ensuing single; the next single ends Stewart’s day (replaced by RHP Tommy Nance). Cubs lead 15-10

B-8 RHP Manuel Rodriguez gave up a single but faced the minimum on a flyout and a 6-4-3 double play.

T-9 Cubs go down in order again: Higgins (K); Hoerner (GO-3); Giambrone (FO-7) B-9 RHP Craig Brooks would get tagged for two runs, but would finally end it for the Cubs

Albert had himself a day at the plate. pic.twitter.com/r5jnQDdfSE