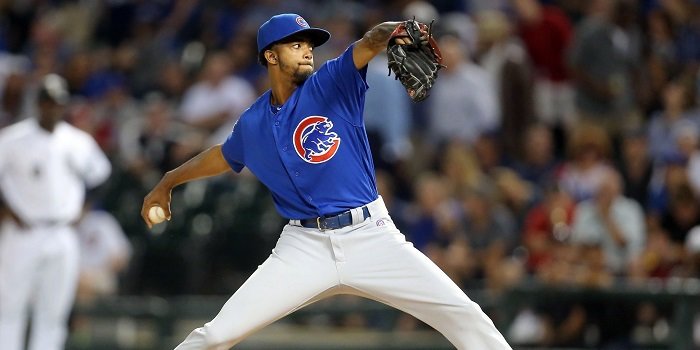 Carl Edwards, Jr., was not the sole cause of the Cubs' meltdown on Sunday, but he was a primary component of it. Photo Credit: Dennis Wierzbicki-USA TODAY Sports

CHICAGO – The Chicago Cubs' bullpen has been anomalous this season, as it has been one of MLB's better relief pitching units, despite suffering multitudinous late-inning collapses. Today, the anomaly persisted, with the Cubs giving up five runs in the final two innings to waste an otherwise great performance and drop their second game in a three-game home series against the Washington Nationals. Losing 9-4, the Cubs far outplayed what the final score indicates, but an eighth-inning grand slam for the Nats made all of the difference between winning and losing.

The Cubs struck first on Sunday, compiling a two-out rally in the second after a pair of quick strikeouts to begin the frame. Following back-to-back singles, Chicago second baseman Javier Baez drove in a run via a single to center off of rookie right-hander Erick Fedde of Washington. Coming off of a woeful start in which he was charged for seven runs, Fedde was shaky early but was able to compose himself following the second inning, pitching three straight scoreless innings thereafter.

On the flip side, Cubs starter Jon Lester was not shaky whatsoever for the majority of his start, as he gave up only one extra-base hit through six innings. A triple by Nats shortstop Wilmer Difo to lead off the third was Lester's lone mistake of the contest's early portion, with Difo coming in to score on a sacrifice fly by center fielder Brian Goodwin thereafter. Goodwin's liner was actually dropped by Cubs left fielder Kyle Schwarber, but the speedy Difo would have likely scored even if the catch had been made, which is supported by the fact that Goodwin was granted an RBI on the play.

Hot-hitting Willson Contreras began the bottom half of the fourth with a solo shot to left for the catcher's 20th home run of the year. Contreras, who went 2-4 with two RBI on the day, is now tied with Cubs first baseman Anthony Rizzo for the team lead with 70 RBI. The second RBI of the afternoon for Contreras came on yet another leadoff jack in the sixth inning that was followed by a solo homer off the bat of Schwarber, his 18th long ball of 2017. Leading 4-1 at that point, the Cubs, who had Fedde reeling, seemed to be well on their way to a victory in the rubber match against Washington.

After allowing a double to Cubs right fielder Jason Heyward two at-bats after Schwarber's bomb, which came on the day that J-Hey reached the 1,000-hit mark for his career, Fedde was yanked in favor of veteran reliever Oliver Perez, who was able to escape the jam without allowing the Cubs to inflict further damage upon the Nationals. Despite his seven strikeouts and three innings of quality pitching, Fedde exited with a less-than-stellar stat line of eight hits and four runs in 5.1 innings pitched. At the time of his departure, it appeared that the Nats rookie was merely outmatched by renowned Cubs starter Lester, but the Chicago lefty went on to experience his fair share of troubles, too.

Lester gave up two doubles to begin the top of the seventh, with Washington infielders Daniel Murphy and Anthony Rendon hitting them in short order. Rendon's hit brought Murphy in to score, cutting the Nats' deficit to two, and Rendon was able to take third on the play by way of a throwing error by Cubs third baseman Kris Bryant. Soon after, Rendon scored on a sacrifice fly by Washington catcher Matt Wieters, who finished with five RBI on the day.

Later in the inning, Lester exited after a frustrating conclusion to his appearance that was somewhat similar to Fedde's. Collecting seven strikeouts in 6.2 innings, Lester was marvelous for most of his start, with only three of his six hits coming prior to the seventh, but his seventh-inning woes set the stage for a dismal Cubs meltdown. With one out and a runner on first in the top half of the eighth, Cubs reliever Carl Edwards, Jr., entered the game and proceeded to suffer the worst implosion of his professional career. Known for being a hit-or-miss pitcher, Edwards has seemingly developed a habit of pitching either incredibly well or incredibly dreadful in his appearances, and Sunday's outing was definitely on the dreadful side of the equation.

With his only hit of the day, Nats first baseman Ryan Zimmerman cracked a double toward the wall in center off of Edwards to place runners on second and third, thus inciting Edwards's collapse. The Cubs next intentionally walked Murphy to load the bases and set up the double-play possibility, but it proved to be moot in the ensuing at-bat, when Edwards hit Rendon with a pitch to give up the lead. At that point, the game was tied, the bases were loaded and, for some unbeknownst reason, Edwards remained in the game. Cubs skipper Joe Maddon certainly paid the price for leaving him in, though, as the HBP was followed by a grand slam from Wieters.

Just his eighth homer of the season and his only hit of the game, Wieters's clutch four-bagger proved to be the game-winner for Washington. For good measure, Goodwin cranked out his 12th home run of the year off of Cubs reliever Koji Uehara in the ninth, further embarrassing the Cubs' bullpen and making the score 9-4 in favor of Washington. Winning by that same tally, the Nats were lucky to earn a five-run win in a game that saw both teams accrue 10 hits. Adding to the prevailing theme of living and dying by the home-run ball that has become synonymous with the Cubs' 2017 season, Sunday's affair saw the Cubs suffer an incredibly painful loss due to a costly late-game homer after dominating for two-thirds of the contest.

Needless to say, Edwards was handed the "L" for his troubles, dropping him to 3-3 in a game that dropped the Cubs to 58-52. Marking their second straight series defeat after getting off to a scorching start out of the All-Star break, the Cubs have been inferior at times against superior teams, such as the Nats and the Arizona Diamondbacks, as of late. Wasting a two-homer performance by Contreras and a 3-4 outing by Heyward, the Cubs' relief pitching woes brought back shades of April, when late-game collapses frequented the Cubs' schedule. And, with a six-game West Coast road trip looming, the Cubs will definitely have their work cut out for them if they are to turn it around any time soon.