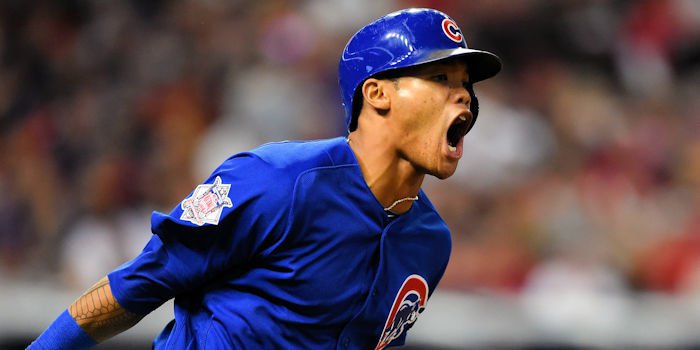 Addison Russell is no longer a Cub. Some fans believe this is a mistake, while most think this was a year overdue.

Nonetheless, Theo Epstein, Jed Hoyer, and the Cubs decided to non-tender Russell a contract — (finally) declaring him a free agent.

Russell was drafted as a middle infielder in the first round of the 2012 MLB draft. Russell stayed in the A’s system before the Cubs traded for him in the Jeff Samardzija deal in 2014.

The Cubs’ prospect the made his debut in the following season in 2015, debuting four days after Kris Bryant and helping to spark the Cubs to their first of four straight playoff appearances. Known for his defense, taking shortstop over for Starlin Castro after playing second base for the first half of the year truly jumpstarted the Cubs down the stretch.

I’m sure nobody can forget the epic diving play he made up the middle in the ninth inning against the Cardinals and led to a thunderous Pedro Strop pair of fist pumps.

2016 brought even better things for Addison. Russell continued to play Gold Glove-caliber defense and supplemented it with a 21 home run 95 RBI season, which included a starting slot in the all-star game and a trip to the postseason.

Russell hit huge homers in the NLCS to get the Cubs back in the series and fueled the Cubs’ dominance in game six of the World Series with the grand slam he launched in Cleveland, and the ring was won a day later.

From there, both on and off the field, Russell took a downward spiral.

From a baseball perspective, he has only hit 26 home runs, 106 RBI — while tallying 35 errors defensively over the past three seasons, including numerous mental mistakes and blunders, base running lapses, and even a public admittance of not knowing the signs which led to a triple-A demotion.

Outside of the white lines, Russell has lost the hearts of many Cubs fans — for good reason. Russell’s ex-wife, Melisa Reidy, placed domestic violence allegations that Russell continuously denied. This was throughout the 2017-2018 season. The back half of 2018 saw Russell handed a lengthy suspension, taking him out of the playoff race and the beginning of the 2019 season. Ultimately, the shortstop admitted that he was guilty before the 2019 season and said he was not fully sure what domestic violence was — which was why he denied the allegations in the first place.

Reidy was specific in her accusations via blog posts or Instagram, citing horrific acts committed by Addison, even while she was pregnant with one of his children.

What came next from the Cubs — was extremely controversial. Instead of cutting ties with the 25-year-old last season, Theo Epstein and Jed Hoyer decided to tender him a contract and commit to making an effort to help foster personal growth with Russell.

I personally love the effort that Epstein and Co. put in, giving resources to Melisa and Addison to work on their relationship and family, giving a mandated domestic violence workshop to all players, coaches, executives and employees of the Cubs and of course the “conditional second chance” given to the once all-star shortstop and World Series Champion.

While it has appeared that Addison’s situation off the field has improved, he was still understandably met with boos in almost every game he appeared — while also underperforming on the field.

The Cubs did not truly have a fit for Russell on the roster in 2020, and fans from Cubs twitter assuredly rejoiced when his non-tender was announced.

However, it is essential to remember the contributions Russell made to the championship that was yearned for — so for that Addison, thank you from all Cubs fans.

That does not mean you have been forgiven or exempt from boos around the city of Chicago, but best of luck in both your career and with your family.

For prospective teams, Russell is a right-handed hitting shortstop with some pop in his bat, a great glove and of course, a ton of baggage — that is not worth the near five million dollars the Cubs would have had to pay to keep him.