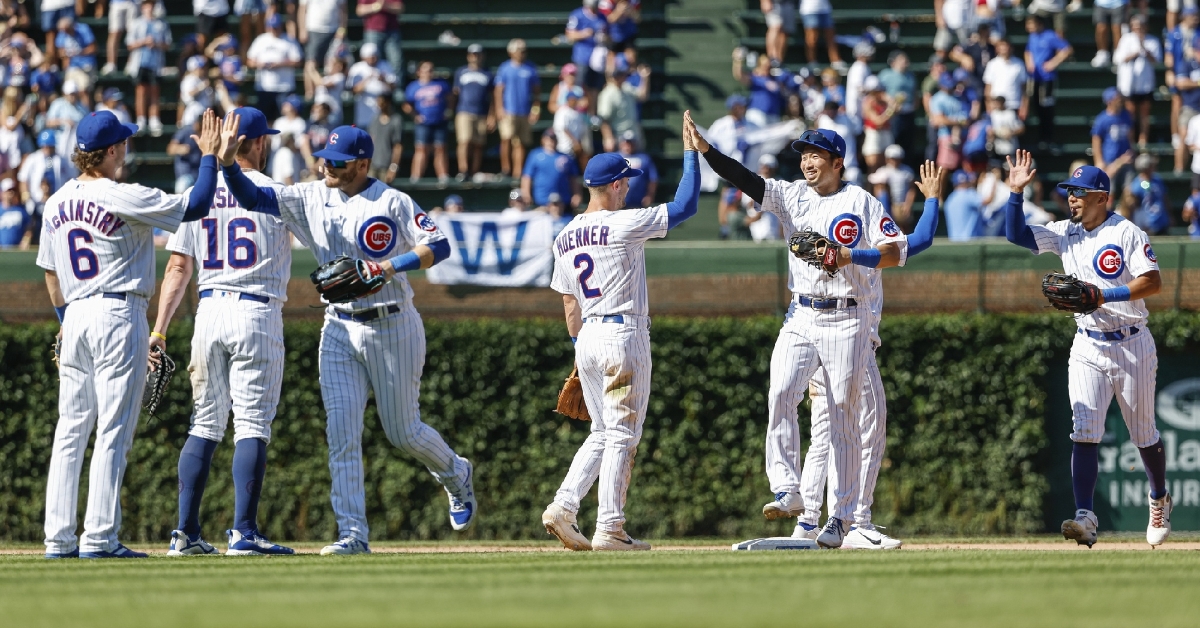 CHICAGO - Remember when the first inning was the best inning for the Chicago Cubs (45-65)? Well, that is a thing of the past as this team scored a lot in the first, just not nearly as recently.

Instead, it has been the seventh inning that has been the excellent inning for the Cubs, especially against the Washington Nationals (37-76) the last two days. Not only were the Cubs trailing 4-1 on Tuesday before scoring four times in the seventh, but there were down 2-0 entering the seventh today after Justin Steele delivered another fabulous outing.

It was in that seventh inning when the Cubs came through yet again as they scored four more times to take a 4-2 lead before winning by that score. That makes eight runs on 11 hits in the seventh inning the last two games as the Cubs picked up a winning homestand at Wrigley 4-2.

Steele was impressive once again, and if it weren't for the overall season that Keegan Thompson has had, he would be their most talked about pitcher. Going back to his last 11 starts spanning from the end of May until now, Steele has had one clunker and has posted a 2.34 ERA over that time. That included six innings of two-run ball today as Steele also struck out nine for the third consecutive start.

Despite delivering that type of an outing, Steele was on the short end of the stick as he left trailing 2-0. That was because Josiah Gray was slightly better, which has been the case when he has pitched away from home. Gray has a 4.81 ERA for the season, but away from Nationals park, that ERA sits at 3.50. Following 6 1/3 innings of two-run ball, Gray continued to pitch well on the road as Steve Cishek came in and let the lead get away.

Things didn't get off to a great start for Steele as he allowed singles to Lane Thomas and Cesar Hernandez to open the game, only to pitch out of that jam. That was a common theme in the early going as the Nationals had some runners on base in the first three innings.

With the score tied 0-0 in the top of the third, Tres Berrea picked up a one-out single, but was still standing at first following a Steele strikeout. On the verge of getting out of the inning without any damage, Hernandez connected for an RBI double, and just like that, the Nationals were on the board 1-0.

Since coming back from the IL, Nick Madrigal has started to look like the hitter the Cubs expected him to be, and his one-out double in the bottom of the third set the Cubs offense up. They could not cash in, but it is excellent to see Madrigal starting to hit.

It was in the fourth inning when the game was saved, as Steele had one of the more unique innings. Not only did he allow three singles to load the bases, but he also came away with three strikeouts to keep a run from scoring. Had it not been for the Joey Meneses homer to begin the sixth, Steele would have gone the final three innings without allowing a run, but left trailing 2-0 following the sixth. That was the fourth homer of the season for Meneses, but his third in as many games.

Moving to the seventh and still trailing by a pair, the Cubs picked the perfect time to get their offense going as they finally started to hit Gray on the mound. Nico Hoerner led the seventh inning off in grand fashion as he took an offspeed pitch over the left field fence to cut the deficit in half.

With one down in the inning, Yan Gomes represented the tying run with a single ahead of the PJ Higgins walk to put two on base. Higgins was robbed of a potential game-tying double in the fifth, but Madrigal came through in the seventh with a grounder up the middle to tie things up 2-2.

Still batting and with a pair of runners in scoring position, Rafael Ortega took a two-strike pitch from Cishek and picked up the eventual game-winning sacrifice fly to make things 3-2. Ian Happ followed that with a huge insurance run RBI single as the Cubs scored four runs for the second straight seventh inning to make things 4-2 in favor of the Cubs.

Now that the Cubs have had to remake their bullpen yet again after the trade deadline, there are going to be a few names that David Ross will call upon in late-game situations. Brandon Hughes and Rowan Wick are two of those guys, with Hughes tossing 2/3 of an inning in the eighth before Wick closed things out for the four-out save. When it comes to Wick, this is his time to prove he is more than capable of holding down a closer role for the short-term future.

The Cubs had nine hits in the win, with Franmil Reyes, Hoerner, and Madrigal picking up two. Zach McKinstry, Gomes, and Happ had the other three hits for the Cubs.