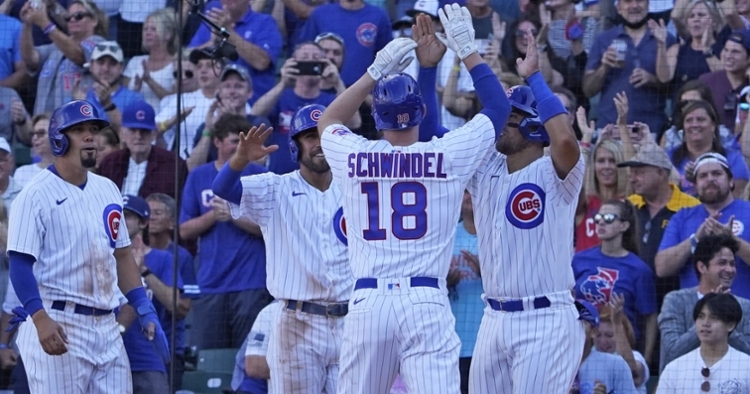 CHICAGO – The Chicago Cubs (63-75) couldn't have asked for a better start to their 10-game homestand taking all four games over the weekend against the Pittsburgh Pirates (48-89). The most recent win came at Wrigley Field on Saturday, where the Cubs and Pirates were locked into a slugfest that saw three grand slams, including the game-winner from Frank Schwindel to lift the Cubs 11-8.

In the process, the Cubs have tied their longest winning streak of the season with six, which is impressive when you look at how different this team is today. Things will get much tougher over the remainder of this homestand, but winning baseball games is fun, and the Cubs are having fun winning games.

Looking for a strong final month of the season is Zach Davies, who is locked in one of the worst if not his worst stretch as a pitcher. He was much better last time out, but once again was bit by the long ball in the first inning when Yoshi Tsutsugo connected for his second first-inning homer in as many days. That shouldn't come as a surprise to anyone when you look at the numbers he put up in Japan, and now those numbers are translating into MLB success.

Opposing Davies was Will Crowe, who hasn't had the best luck against the Cubs this season. After a scoreless first, Crowe found it challenging to keep the ball in the yard as Matt Duffy and Jason Heyward connected for back-to-back homers in the second to give the Cubs a 2-1 lead. It was the first homer in nearly a month for Heyward, where Duffy didn't since late April, early May.

Just when you thought that was the momentum swing the Cubs needed, Davies continued to struggle on the mound, which led to the big blow by the Pirates. Bryan Reynolds has owned Davies in his career, and with one swing, he put the Pirates on top 5-2 as he connected for the grand slam. That wasn't the only grand slam of the afternoon, as the Cubs wasted little time answering back in the bottom of the third.

Not only did Rafael Ortega lead the inning off with a walk, but Frank Schwindel followed that with a single putting a pair of runners on base and no outs. Ian Happ kept the line moving with an RBI single to pull within 5-3 before the Patrick Wisdom walk led the bases once again. Five batters into the third and five runs came across as Duffy not only hit his second homer of the game, but connected for the second grand slam of the inning as the Cubs now led 7-5.

That was only the beginning as the Pirates continued to keep the pressure on in the fifth, with Jacob Stallings hitting a sacrifice fly to pull the Pirates within 7-6. That was the end of the line for Davies as he got into the fifth, but failed to record an out as he was charged with six earned runs. With the lefty Rex Brothers and Manny Rodriguez called on to finish out the fifth, Ben Gamel tied things up 7-7 as he came across to score on the Rodriguez wild pitch, although that run was charged to Brothers.

After Adam Morgan started the sixth and couldn't get through it, Adbert Alzolay was now on the bump, looking to continue what he started on Wednesday. Although he allowed a Stallings infield hit to give the Pirates the 8-7 lead, he was on top of his game yet again, striking out two in another impressive relief outing.

One of the busiest pitchers in this series was Pirates lefty Sam Howard who entered in the bottom of the seventh for the third time this series. With one down, Robinson Chirinos took a walk before Alfonso Rivas came through with a pinch-hit single, putting the winning run at first. That single was the Cubs 56th pinch-hit of the season, tying them for first in MLB with the San Francisco Giants.

Looking to deliver the game-winning knock, Willson Contreras came in as a pinch hitter and ripped a long fly ball to left field, only to see Ben Gamel make one of the plays of the season with an incredible diving catch on the warning track to halt the Cubs rally temporarily. Have no fear, the top of the lineup was here with Ortega taking a walk to load the bases for the red-hot Schwindel.

With Derek Shelton calling for a new pitcher in Nick Melton, Schwindel came through with the biggest hit of his life, taking what looked to be a ball in the third into the left-center field basket as the Cubs took the 11-8 lead. It was the third grand slam for both teams in the game and second for the Cubs as Rowan Wick shut the Pirates down the final two innings to earn another save. The contest was the first in MLB history to feature three go-ahead grand slams.

A career day for Matt Duffy

Not only did Duffy have a career day, but he had a day full of firsts. His first homer of the day saw Duffy hit his first career homer at Wrigley. His grand slam was not only his first career grand slam, but his first career multi-homer game. That resulted in a five-RBI game for the second time this season, but the first time he has ever done that at the Friendly confines.

Not bad for someone who signed a minor league contract this offseason and wasn't supposed to contribute this season. Instead, Duffy emerged as an everyday player earlier in the season, but he is once again an everyday player at a different position. Duffy is precisely what this offense needs when it comes to a contact-first approach, and he continues to show why he was once a top prospect who finished second in rookie of the year voting to Kris Bryant.

It is incredible how different this team looks right now compared to earlier in the season, and yet they may be playing their best ball since reaching the 38-27 mark in May. A big reason for that is the way this team plays, and they play baseball the right way and the way it should.

Sometimes in baseball, it isn't the team with the most talent or more stars who win games, but instead the teams that want it more and play together. That is what the Cubs are doing right now, as nearly everyone on this roster was in the Minors at some point this season. This is one thing you can give the Cubs front office credit for, as they have found tons of valued depth pieces this offseason.

Those pieces are playing everyday roles right now and are playing them at a higher level than the core players were this season. Whether that continues or not remains to be seen, but this new-look team is winning games again, and a strong September could lead to a ton of confidence next season.

The Chicago Cubs now have increased their MLB-best winning steak to 6 games.

'Frank the Tank' to the rescue

Of the many stories for the Cubs this season, and there has been a lot, the Schwindel story is becoming legendary. Not only is he coming off a month where he posted the fifth-highest OPS in major league history, but all he does is keep hitting, and usually, when he hits, he does damage.

His grand slam on Sunday was his 11th homer of the season, but his 10 with the Cubs in just 32 games. He also has 29 RBIs with the Cubs, which have all come in 29 games. Those are some impressive numbers any way you look at it. Schwindel was interviewed following his walk-off slide on Saturday, and you can see how much he enjoys playing in Chicago.

As weird as it is not to see Anthony Rizzo playing first, Schwindel is playing himself into an extension this offseason where he will be the starting first baseman going forward. He is enjoying his time in Chicago, and fans are enjoying the ride he is putting them on.