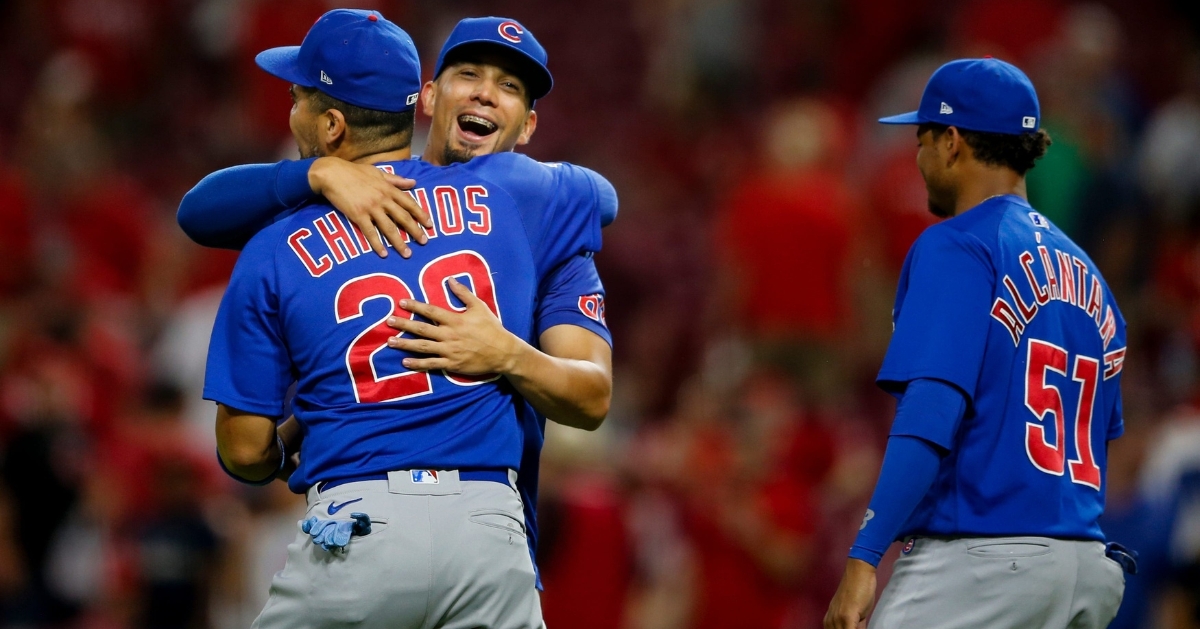 So that is what it feels like to win a game. At long last, the Cubs' miserable slide ended as they topped the Reds 2-1, ending a 12-game losing streak. It didn't come easy, but nothing comes easy when a team goes through a slump like the Cubs.

With the professor Kyle Hendricks on the mound against the young stud Vladimir Gutierrez, Hendricks looked to put the Reds in detention by delivering another lesson. The lesson was you don't have to throw hard to win games as once again Hendricks was on top of his game, giving the Cubs six great innings. Although his command wasn't as crisp as it typically is, Hendricks gave the Cubs everything they could ask for, allowing just one run on three hits in six solid innings of work.

The win moved him to 14-5 on the season as he continues to move towards a career-high in wins. Offensively, runs were hard to come by, with the Cubs struggling equally as much against Gutierrez. A big reason for that was swinging at more than 50% of the pitches they saw, which resulted in quick pitch counts to keep him in the game.

Frank the tank Schwindel made sure to capitalize on the opportunity he got bringing home Rafael Ortega with an RBI double in the third to put the Cubs in front 1-0. It was not only a rare lead for the Cubs, but one they refused to let go of as they did just enough to secure the W. Looking to add to their lead, Ian Happ connected for his 13th homer of the season, doubling the Cubs lead 2-0 in the sixth.

Cincinnati made things interesting in the bottom of the sixth as Nicholas Castellanos took a rare Hendricks mistake and crushed it over the right-center field fence for his 22nd homer of the season to make things 2-1. With Rowan Wick called on to pitch the seventh, the Reds had their best opportunity to grab the lead with plenty of drama following.

After Kyle Farmer singled to lead things off, Tyler Naquin followed that up with another single as the Reds had something going. Wick would pick up a massive strikeout against Shogo Akiyama before hitting Tucker Barnhardt to load the bases. Wick then went on to strike out Jonathan India, setting the stage for Joey Votto. David Ross countered by going with the lefty Adam Morgan, who induced an inning-ending grounder to end the threat.

That would be the rest of the threats for the Reds as Codi Heuer came on to pitch the final two innings retiring all six hitters he faced with a pair of strikeouts. Heuer collected his first save as a Cub and his second career save as the Cubs finally put an end to their losing streak.

Happ and the Great American Ballpark

If Happ was a Red or could play at the Great American Ballpark 81 games a season, he may be in the MVP conversation every year. For whatever reason, Happ loves to hit at this ballpark and has his highest batting average at any park in this stadium.

No matter how bad things have gone for him during the season when he hits the field in Cincinnati, something clicks, and he looks like a different player. Following his three-hit performance on Tuesday, Happ now has four hits in the series to go with three RBIs. He is also hitting .333 at the Great American Ballpark this season, with his season average still under .200.

If there was ever a series to get Happ going for the stretch run, this may be the one. Regardless of what happens the rest of the way, Happ will be a huge topic this offseason as the Cubs will face a challenging and interesting decision.

Much like Happ, Bote is an interesting case, especially when you look at his track record. Bote is hitting under .200 this season and has posted a .229 average for his career. That is not what you want from an everyday hitter. The thing he does do better than almost everyone on the team is hit with guys on base as he not only led the team in RBIs last season, but seems to come through with countless clutch hits.

For whatever reason, Bote seems to do damage when he makes hard contact, but the problem is making enough contact. Through the offensive struggles that he continues to deal with, Bote has proven his worth in the field as a defender this season, especially at second base with Nico Hoerner out.

Known as a reliable fielder, Bote has taken his fielding skills to a whole new level this season and has played gold glove defense across the board. Had he not injured his shoulder and qualified for enough games, you could be looking at a gold glove defender this season. Unlike Happ, Bote is under contract for a few more years and at a very reasonable price.

I find it very unlikely the Cubs move on from him even if the offense continues to struggle. Bote is going to have a role on this team in some regard during the 2022 season. The question is will he be a starter, and where will that playing time come from?

At long last, Michael Hermosillo is called up

Across 15 games, Hermosillo may have only hit .231, but it was the quality of at-bats that he put together. Some felt that he deserved to make the roster out of camp, but would have been better suited to start the season in AAA. That is precisely what he did, and boy, did he put on a show in Des Moines this season.

In 43 games with the Iowa Cubs, Hermosillo was tearing the cover off the ball, posting a .306 average to go with 10 homers and 29 RBIs. Keep in mind he missed the first two weeks of the season with an injury and then missed time in late July with a hamstring injury. Despite missing that time, he never missed a beat, and it got to the point where there was no point keeping him down in AAA if he was going to continue to destroy pitches.

I am surprised it took this long to get Hermosillo up to the bigs, but now that he is here, don't look for him to return. This could end up being similar to that of Ortega, where he began to thrive once in an everyday role. If Hermosillo can put up numbers anywhere close to his Minor League season, you are looking at another piece the Cubs may consider keeping for the 2022 season.