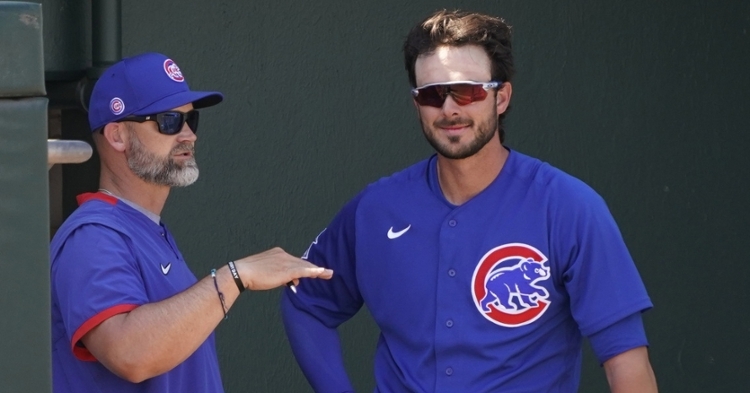 Make that four straight wins for the Cubs, and six games without a loss as Chicago improved to 11-5-3 this spring after defeating the Rockies. The win moves Chicago back into first place in the Cactus League standings as they continue to surge at the right time.

Chicago may have had only six hits in the game, but they made them count with both Jake Marisnick and Kris Bryant belting home runs to back Trevor Williams on the mound for the 4-2 win. Speaking of Williams, he continued to have an impressive spring lasting five innings in his outing and throwing just over 50 pitches. Williams allowed only one run on a Trevor Story solo homer and struck out four as he lowered his ERA to 1.32 on the spring.

Opposing him was a familiar face in former St. Louis Cardinal Aaron Gomber, who was acquired in the Nolan Arenado deal. After allowing an RBI groundout from Bryant in the first, Gomber settled in to pitch 4 1/3 innings of strong baseball. Given the early lead in the first inning, Williams was able to keep the Rockies in check until that fourth-inning homer from Story tied things up at 1-1.

The Cubs wasted no time retaking the lead in the bottom of the fifth when Marisnick connected for his second home in the last two games and his second homer of the spring, putting the Cubs up 3-1.

Marisnick has now driven in five runs in just eight spring at-bats. Hoping to solidify a spot on the opening day roster, Shelby Miller continued his great spring and battled through some command issues to do so.

Holding a 3-1 lead in the bottom of the sixth, Bryant got the monkey off his back and launched a long homer to left to extend the Cubs lead to 4-1. That

was the Cubs final run of the game as it was up to the pitching to hold tough. Looking to build off his last outing, Craig Kimbrel took the ball in the seventh, striking out a pair of men before turning things over to Andrew Chafin in the eighth.

With just three outs remaining, Pedro Strop took to the mound for the first time this spring as he is hoping to impress David Ross. Despite some rustiness that saw him allow one run on one hit, Strop had an increase in velocity from last year and looked comfortable on the mound. His run came off a passed ball from Miguel Amaya, but it didn't affect the outcome as the Cubs won again 4-2.

The monkey is off his back

With less than two weeks to go until the regular season, Bryant needed to get his first homer of the spring more than anyone. He did just that in the sixth inning, and it was a great sight to see. Not only that, the sound that came off his bat was a pretty sound, and you could see a sense of relief when he got back to the dugout. Hopefully, this is the start of a strong finishing kick.

The more the merrier

When Len Kasper announced he was going to the South Side to perform play-by-play radio duties, it left a huge hole to fill in the announcer booth. Given the history that comes with being a Cubs broadcaster, you knew there would be tons of candidates hoping to land the gig. Ultimately, Jon Sciambi was awarded the Marquee Network gig, but he is not alone.

Given his contract with ESPN still in place, Sciambi will announce roughly 100-110 of the Cubs games on Marquee while still getting some ESPN games. That leaves over 50 games that need to be accounted for. Radioman Pat Hughes has already done some games this spring, and it wouldn't be a surprise to see him earn some time this season.

However, it was Beth Mowins making her Marquee debut on Saturday, and I was quite impressed. Mowins has done plenty of play-by-play in her day, but this was the first baseball game that she has ever done. Not only did she do a great job, but I would love for her to be Sciambi's fill-in for the remainder of the season. Chris Meyers is also on the list of people expected to fill in for Sciambi, as Mowins certainly proved her worth today.

Hats to the left

At long last, Strop made his spring debut for the Cubs after breaking COVID protocol earlier in camp. Signed to a minor league contract this spring, Strop knew it was going to be hard for him to make the team this spring and knew he would come in give it his all.

After missing nearly two weeks after breaking COVID protocol, it makes it almost impossible for him to land a spot with just 10 games left. However, it was great to see his smiling face on the mound as he belongs in Chicago. One of the best relievers in franchise history, Strop struggled through injury issues the past two seasons but admitted this feels like home.

Obviously, he was a little rusty, but the key was his velocity after that dipped a bit last season. His velocity was back in the 93-95 range, and when he missed, he didn't miss by much. It will be interesting to see how Ross handles him the rest of spring, especially when he is bidding for a job.

And peep those career numbers with the Cubs. One of the best relievers in Cubs history. pic.twitter.com/xZd0uK9NGn