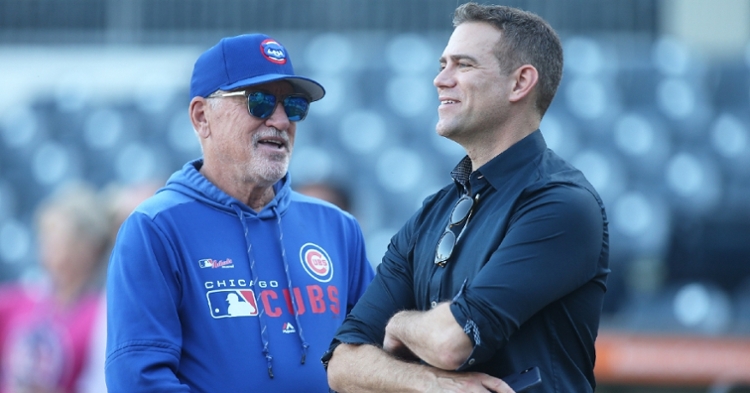 In spite of the Brewers' fears, Cubs manager Joe Maddon is going with a decent lineup on Friday. (Credit: Charles LeClaire-USA TODAY Sports)

ST. LOUIS — Chicago Cubs manager Joe Maddon went viral on Thursday for stating that he did not "give a s---" about any complaints that the Milwaukee Brewers might have regarding the Cubs' lineups in their upcoming 3-game series at Busch Stadium against the St. Louis Cardinals. The Brewers are one game behind the Cardinals in the standings, and the Cubs, who are dealing with a slew of injuries, were expected to utilize a "B team" against the Cardinals.

However, the Brewers were likely pleasantly surprised by the Cubs' lineup for Friday's series opener versus the Cardinals, as the Cubs announced that they planned to start catcher Willson Contreras and second baseman Ben Zobrist, who were both candidates to be shut down for the final series. Of course, the injured Javier Baez, Kris Bryant and Anthony Rizzo will not play, and Cole Hamels is the only full-time starting pitcher slated to toe the rubber for the Cubs during the 3-game set.

With that in mind, the Cubs' starting lineup for Friday's matchup is fairly respectable. The Cubs' Twitter account hilarious trolled the Brewers when releasing the lineup graphic, as "for your approval" makes up part of the caption for the graphic. Making light of the Brewers reportedly being critical of the Cubs' plans to rest key players, the snarky tweet adds fuel to the fire that is the Brewers-Cubs rivalry.

Here is tonight's #Cubs starting lineup for your approval. pic.twitter.com/Q3AtGQtMv0

Update: The Cubs later announced a revised starting lineup that the Brewers probably did not approve of, as Nicholas Castellanos was scratched due to groin tightness. Tony Kemp moved from center field to right field, and Albert Almora Jr. was inserted into the starting lineup as the center fielder.