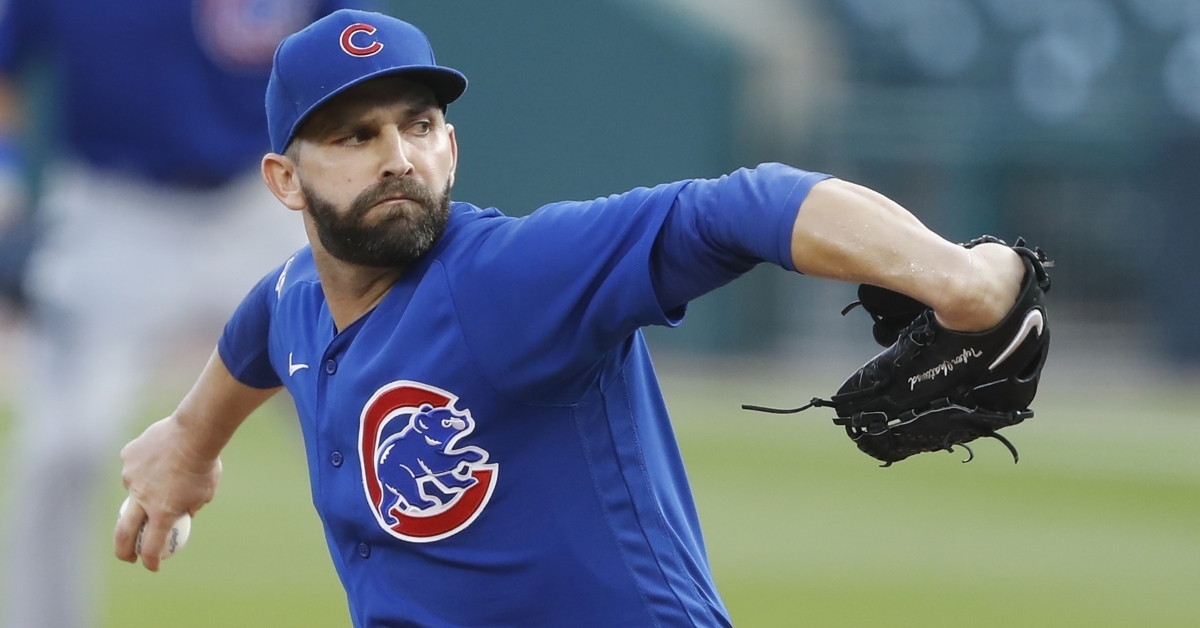 Tyler Chatwood suffered a setback in his rehab and might not pitch again this season. (Credit: Raj Mehta-USA TODAY Sports)

CHICAGO — On Tuesday, Chicago Cubs manager David Ross updated the media on pitcher Tyler Chatwood's injury status. The right-handed Chatwood has not pitched since injuring his right elbow and forearm in a short-lived start on Aug. 30. While Chatwood has avoided being shut down for the season so far, he apparently suffered a setback today that led to Ross saying that he is "on the shelf."

Chatwood suffered a setback in rehab on Tuesday. Ross told reporters that he was "pushing hard" and "trying to get to that next gear" when he experienced elbow pain. For now, the Cubs will approach Chatwood's rehab cautiously because if he were to aggravate his injury to the point of requiring Tommy John surgery, that would all but end Chatwood's 2021 season before it began.

David Ross says RHP Tyler Chatwood (forearm) didn't feel good. Ross says he was pushing hard, but he's going to be on the shelf. His season is likely in jeopardy. #Cubs

Chatwood was trying to get to that next gear, Ross said. “(Elbow) wasn’t feeling good.” A lot of caution now

"Chatty's gonna be a little bit," Ross said. "Chatty ... we gotta stay away from for a minute. We will reassess his status later on in the week."

Ross went on to say that he would not rule out Chatwood being "a bullpen piece" if the Cubs were to make a World Series run, which indicates that Chatwood will definitely not be ready to pitch until late in the postseason, if at all this year. Through five starts this season, Chatwood went 2-2 with a 5.30 ERA.

"His heart was pushing him one way, but his body was telling him to hold back," Ross said of Chatwood's elbow discomfort. "I don't want to make a statement that his season is over, but I would say there is definitely a lot of caution."

Prior to suffering the elbow/forearm injury on Aug. 30, Chatwood was previously placed on the injured list because of a back ailment that is likely unrelated to his current injury. The odds are stacked against Chatwood pitching again this season, and, even if he does return, his tenure as a member of the Cubs' 2020 starting rotation will not resume.

Chatwood has had a setback with elbow/forearm as he pushed his rehab. Ross says not ruling out possibility that if Cubs make World Series he might have time to be a bullpen piece for that.

In other injury news surrounding the Cubs, left-handed pitcher Jose Quintana was able to complete a bullpen session on Monday and has another one, as well as a simulated game, scheduled for the near future. After missing most of the regular season while recovering from offseason thumb surgery, Quintana made two relief appearances before being placed on the injured list. Like Chatwood, Quintana figures to serve as a reliever if he is able to retake to the mound this year.

• Quintana threw bullpen Mon, another one Wed, then sim game. Could be option for bullpen later on.
• Chafin sim game Wed
• Chatwood "on the shelf" after a setback. Wouldn't say he's done for the season, but arm wasn't responding well to throwing program.