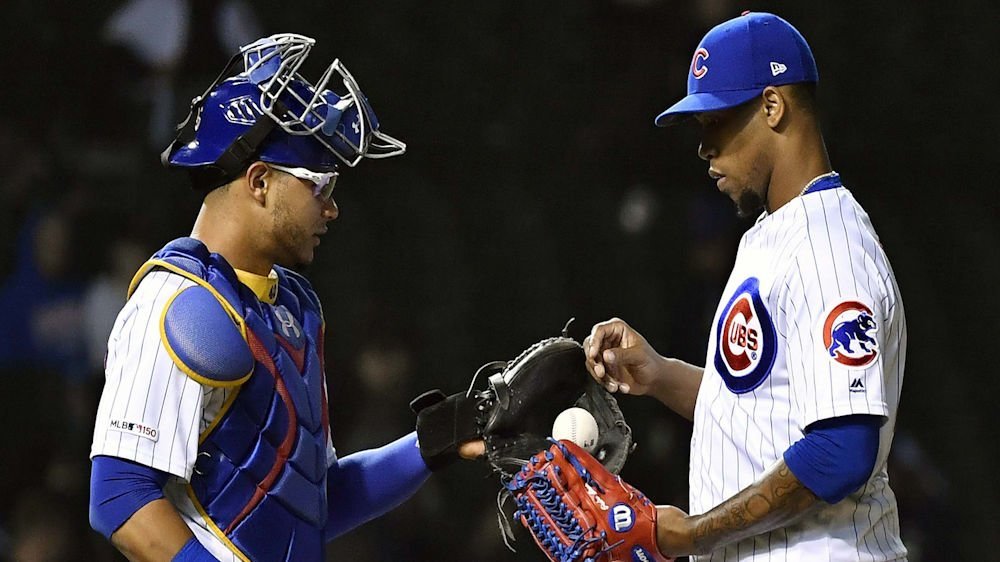 Pedro Strop dominated in his return to the mound on Tuesday, tabbing his fifth save of the season. (Credit: Quinn Harris-USA TODAY Sports)

Following the Chicago Cubs' 6-3 win over the Colorado Rockies at Wrigley Field on Tuesday, right fielder Carlos Gonzalez and relief pitcher Pedro Strop were interviewed in the Cubs' locker room. Both players proved to be impactful performers for the Cubs on the night, with Gonzalez collecting two RBI against his former team and Strop picking up the save in his return from an injury layoff.

"It was a weird thing, but it's part of the game," Gonzalez said when asked what it was like to play against a Colorado club that he was a part of for a decade. "When the game is on, you just try to focus on getting good at-bats and helping your team win."

Lots & lots of hugs for @CarGo5 as the #Cubs welcome the #Rockies to town for 3. Wait for the embrace w/Arenado??you think he misses him a little?! Join us on @NBCSChicago for #AuthenticFan Night at 7! pic.twitter.com/j7ptjmU2e3

Gonzalez has started in both of the games that he has been on the Cubs' roster for since being promoted from Triple-A on Monday morning, and he has already come through with several critical plays. The veteran outfielder is enjoying his time as a Cub so far and is excited to have the opportunity to suit up for a World Series contender.

"This is a great opportunity for me and a great challenge as a player," Gonzalez said about his newfound role with the Cubs. "This is a great franchise. We play meaningful games, and every game counts for us."

As for Strop, he did not miss a beat as he settled back into his position as the Cubs' closer, with the reliever sitting the Rockies down in order in the ninth to tally his fifth save and secure the victory. Strop missed approximately a month due to a hamstring injury and was only just activated from the injured list on Tuesday afternoon.

"It felt really good," Strop said while discussing his return to the mound. "At the beginning, I was a little rushed, with the adrenaline of the game taking it to another level. After that, I was able to execute."

Strop was asked about Cubs starting pitcher Kyle Hendricks' marvelous performance, in which he struck out 10 batters in seven innings of work and picked up the winning decision. Grinning from ear to ear, Strop dished out compliment after compliment pertaining to "The Professor" and was clearly happy to have witnessed him pitch at such a high level.

"He was amazing," Strop said of Hendricks. "He's always been fun to watch, with the way that he paints corners. I was happy to see him use more of his curveball, too. It was unbelievable."