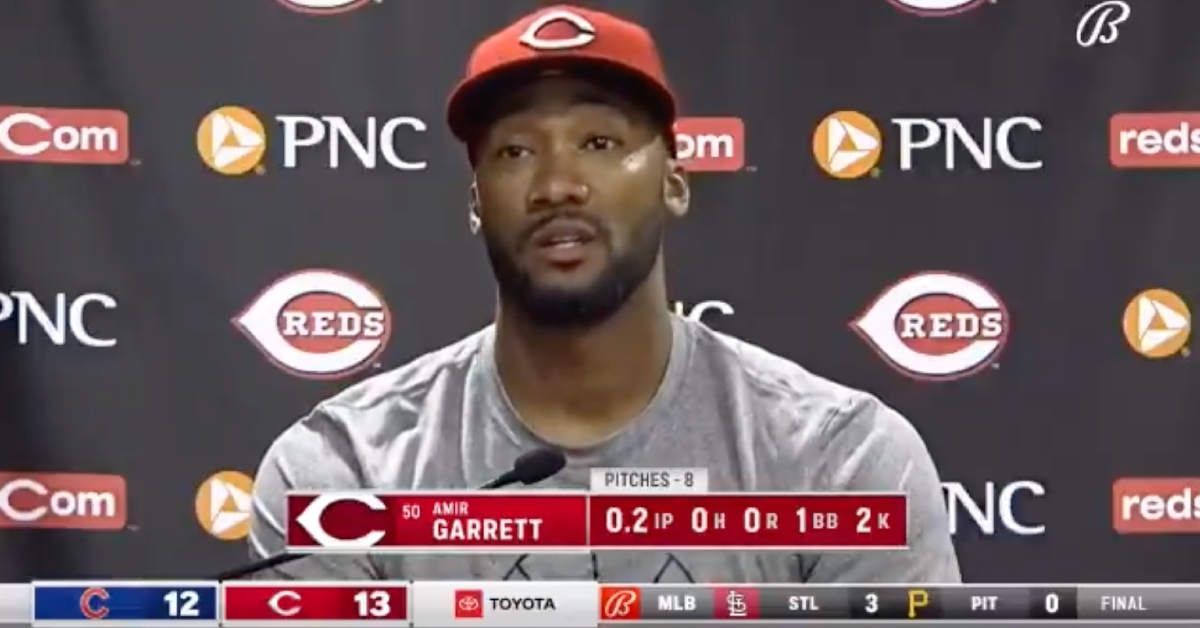 Regardless of his reasoning for yelling at Anthony Rizzo, Amir Garrett added fuel to the fire that is his rivalry with the Cubs.

CINCINNATI — Perhaps the most riveting moment of the thrilling three-game series between the Chicago Cubs and Cincinnati Reds that concluded on Sunday was the bench-clearing confrontation in Saturday's 3-2 Cubs win. The Reds took 2-of-3 from the Cubs at Great American Ball Park, and Reds reliever Amir Garrett pitched well on Saturday and Sunday.

Garrett's quality relief pitching over the weekend was overshadowed by his needless showboating on Saturday, as the fiery left-hander, who has a reputation as a hothead, sparked a heated incident late in the game by barking at Cubs first baseman Anthony Rizzo. Garrett struck Rizzo out not long after entering to pitch in the top of the eighth and let Rizzo hear about it. Taunting Rizzo and firing some rather colorful language at him, Garrett was far from modest in the wake of the strikeout.

As a result, the dugouts emptied, and Cubs shortstop Javier Baez, who has a history of beefing with Garrett, had to be held back from confronting Garrett. In the process, Baez extended his left middle finger in order to send a clear message to Garrett. After the game, Baez and Cubs manager David Ross both spoke out against Garrett, with Ross referring to the pitcher's actions as "garbage."

Garrett attempted to rationalize his behavior when he addressed the media in a press conference following Sunday's contest. Providing an eyebrow-raising explanation that did not contain any admittance of his longstanding rivalry with the Cubs, Garrett merely chalked up his post-strikeout exuberance to him letting Rizzo know that he was back to pitching at a high level after struggling in recent appearances.

"When I struck Rizzo out, I let him know"

That explanation does not exactly add up, however, because the Cubs and Reds faced off for the first time this season on Friday, with Garrett making his first appearance against the Cubs this year on Saturday. Therefore, Rizzo and the Cubs had no previous matchups against Garrett in 2021 that could have been used to determine whether or not he was "back." Regardless, the longstanding rivalry between Garrett and the Cubs intensified on Saturday, which should make for an interesting storyline throughout the 2021 slate.