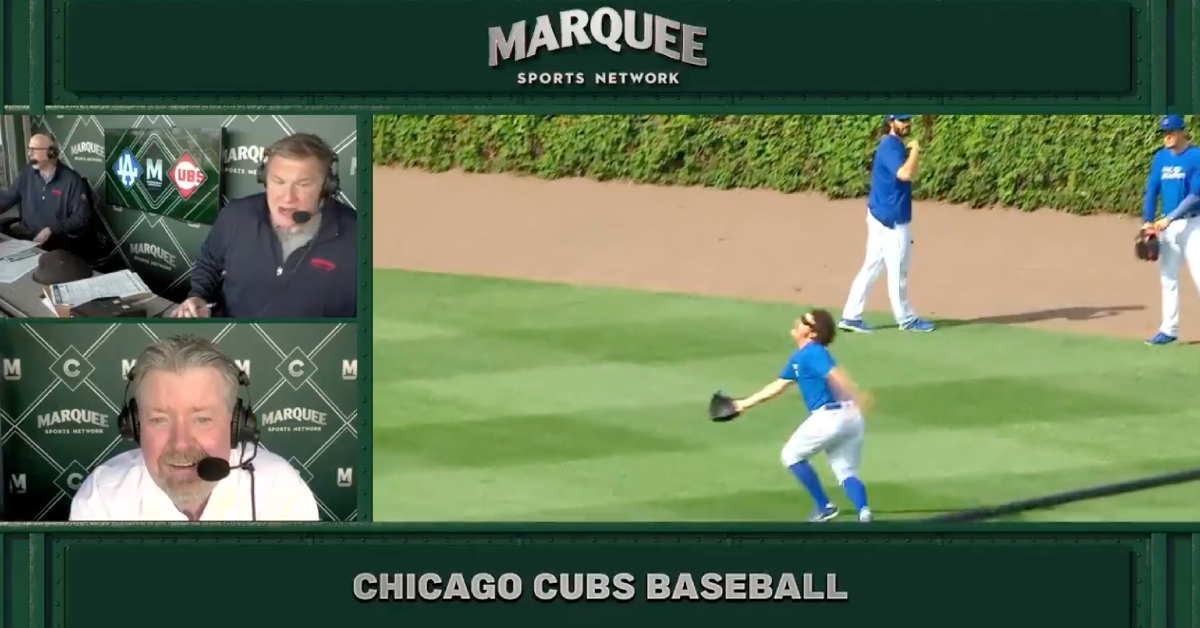 While wearing an Obvious Shirts T-shirt with the message "FAILED STARTER." on it, Andrew Chafin failed to make a catch.

CHICAGO — Chicago Cubs reliever Andrew Chafin has only been a member of the North Siders since last season's trade deadline, yet he is already arguably the fan favorite of the club's pitching staff. From his hilarious T-shirts and lack of insecurity about his "dad bod" to his solicitation of a "beater" car from Cubs fans, the 30-year-old left-hander has generated plenty of attention thus far this season.

A mic'd-up Chafin chatted with the Marquee Network broadcast team during pregame batting practice at Wrigley Field prior to Monday's matchup between the Cubs and Los Angeles Dodgers, which was eventually rained out. The mustachioed pitcher tried his very best to make a circus catch of a fly ball in the outfield, channeling Willie Mays by running toward the wall while craning his neck to look up at the ball.

Unfortunately, despite being cheered on by the broadcasters in his earpiece, Chafin was unable to make the catch. He did, however, make up for failing to produce a web gem by providing a comical sound bite in which he asked play-by-play announcer Jon "Boog" Sciambi if he had cold beer, which Sciambi, who stated that he had never even met Chafin in person, answered in the affirmative.

The conversation revolved around Chafin, formerly of the Arizona Diamondbacks, living on his boat early in his big league career, and Sciambi's admission of possessing brewskis was enough to earn an invite onto Chafin's boat. Regardless of how the remainder of Chafin's playing career pans out, the funnyman has a bright future ahead of him in whichever medium he chooses to showcase his personality, whether it be broadcasting or standup comedy.

Andrew Chafin is a national treasure.