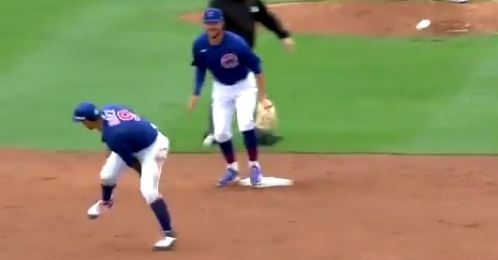 During Friday's game against the Brewers, Javy Baez made a defensive gem by doing a no-look, between the leg throw to Kris Bryant to record the out at second base.

Good job for Bryant to stay ready waiting for Baez to try to make the defensive play.

Jason Heyward was being interviewed on the TV broadcast and was blown away by Baez's gem.

"Just Javy Báez being a kid, playing a game," he said.

No-look, between the legs.

A nice shot of the play:

#javy Baez with the between the legs glove throw to Bryant to get the force at second. #cubs pic.twitter.com/OER7IdMJ4C