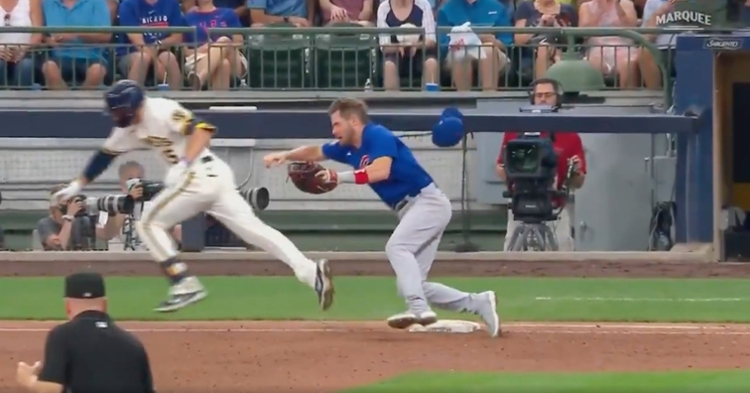 A baserunner collided with Patrick Wisdom at first base, resulting in Wisdom being removed from the game.

MILWAUKEE — The injury issues faced by the Chicago Cubs just will not cease, as Patrick Wisdom became the latest Cub to suffer an ailment. Only one game after catcher Jose Lobaton was injured on a play at first base, Wisdom was injured at first base, as well. Wisdom exited Wednesday's game in the second inning following a collision that left him shaken up.

With two outs in the bottom of the second at American Family Field, starter Jake Arrieta fielded a dribbler hit by right fielder Tyrone Taylor and made an off-target throw to Wisdom, who started at first base with Kris Bryant and Anthony Rizzo out due to injuries of their own. Taylor and Wisdom collided due to Wisdom having to move into Taylor's path in an effort to catch Arrieta's throw. The ball sailed past Wisdom, though, and Arrieta was charged with a throwing error.

While Wisdom was lying on the ground in pain, shortstop Willy Adames and catcher Omar Narvaez scored. Taylor remained at first base and avoided being injured on the play. Wisdom was not so fortunate, as he was pulled from the game after getting evaluated by a trainer and appearing woozy. Catcher Taylor Gushue, who was called up earlier in the day to replace Lobaton on the active roster, took over for Wisdom at first base with the Cubs leading 7-5. As for Arrieta, he was subsequently yanked from his short-lived outing and replaced on the mound by reliever Keegan Thompson.